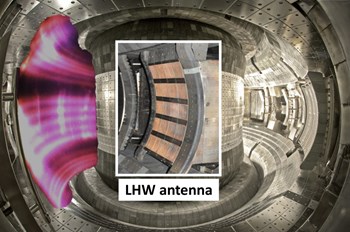 The EAST tokamak is located in Hefei, China at the Institute of Plasma Physics, Chinese Academy of Sciences. First plasma was achieved in EAST in September 2006. EAST incorporates fully superconducting coils with ITER-like magnetic configurations, which allows the exploration of plasmas over long timescales to address plasma physics and technology issues for ITER under steady-state operation conditions. The photograph shows the interior of the EAST tokamak (right) and the helical structures created by lower hybrid microwaves that lead to ELM control (left); the lower hybrid antenna is shown in the centre.
Recent experiments performed on the EAST superconducting tokamak in the Institute of Plasma Physics in Hefei, China have demonstrated the sustainment of high temperature plasmas in the so-called H-mode confinement regime over a record timescale of more than 30 seconds, as reported in the journal Nature Physics. The achievement of H-mode plasmas and their long-time sustainment will be key to the success of the ITER Tokamak and marks "another advance in fusion," says article author William Morris in his commentary. The long-pulse H-mode plasmas in the EAST tokamak have been achieved by heating the plasma with radio-frequency waves, such as lower hybrid waves.


While performing the recent experiments, the Chinese scientists led by Jiangang Li and Houyang Guo and their international collaborators from Germany, USA, France and the ITER Organization discovered that the application of lower hybrid waves had a strong and beneficial effect that reduced the repetitive energy releases by the plasma, which are characteristic of H-mode plasmas.


These energy releases are caused by "plasma outbursts" known as Edge Localized Modes (ELMs) and resemble solar flares. ELMs will have to be controlled in the ITER Tokamak because they cause the erosion of the plasma-facing components and significantly reduce their lifetime.


Experiments at EAST have shown that the effect of lower hybrid waves on the ELMs is due to the presence of electric currents at the edge of the plasma driven by these waves. These currents cause magnetic field "wrinkles" to appear in the external surface of the plasma, which otherwise has a smooth doughnut shape.


This innovative approach intrinsically provides a flexible control tool for ELMs over a broad operation space, and may open a new avenue for achieving steady-state high performance plasmas in future fusion devices if issues regarding its extrapolability to ITER and future tokamak reactors can be successfully resolved.


The use of small scale modifications of the edge magnetic field created by a set of coils external to the plasma to control ELMs was developed at the DIII-D tokamak in the USA and subsequently demonstrated worldwide in other tokamak experiments. It is now one of the two ELM control schemes considered for ITER. The recent results from EAST are the first to demonstrate this approach by modifying the edge magnetic field with currents created in the plasma itself without the need for external coils, thus confirming the universality of the physics mechanism leading to the control of ELMs by the approach adopted for ITER. Lower hybrid waves are being considered for ITER as an upgrade to be implemented after plasma operation commences.


Furthermore, the EAST experiments have demonstrated that driving local currents in the edge plasma by lower hybrid waves has some potential advantages with respect to the use of external coils in achieving ELM control. The use of lower hybrid waves not only facilitates ELM control over a large range of currents in the tokamak plasma, but also increases the area of the tokamak interior components over which the plasma deposits its energy in stationary conditions. This potentially offers a new means for heat flux control, which is a key issue for next-step fusion development.


EAST has ITER-like magnetic configurations and heating schemes, and will be one of the world's first magnetic fusion devices to address physics and technology issues facing high-power, long-pulse operation in high confinement regimes, thus providing a very timely test bed for ITER.