TEXTOR: The end of an era 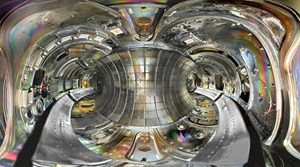 View of the burn chamber of TEXTOR. Source: Forschungszentrum Jülich
The Forschungszentrum Jülich research center in Germany reported last week on the shutdown of the TEXTOR tokamak after thirty years of operation. Jülich plasma physicists are now refocusing their efforts on investigating materials science and the challenges associated with continuous operation. We reproduce the full press release below.


Jülich, 5 December 2013—For thirty years, the results produced at Jülich's large-scale device TEXTOR have considerably advanced international fusion research. Yesterday at 18:00, a plasma discharge provided science with data for the very last time. Now that TEXTOR has been shut down, Jülich fusion research will turn its full attention to material issues and problems associated with continuous operation—and thus to the remaining hurdles on the way towards environmentally friendly and safe power plants generating energy based on the principle of the sun's fire.


"TEXTOR was immensely important in helping us to gain the knowledge that we have today of how fusion works," says Prof. Ulrich Samm, director at the Institute of Energy and Climate Research/Plasma Physics. If it proves possible to harness nuclear fusion—the fusion of atomic nuclei—to generate energy, then mankind will have access to an almost inexhaustible source of energy.


Since 1983, the Tokamak EXperiment for Technology Oriented Research (TEXTOR for short) has provided a whole series of scientifically outstanding results. For example, in 1989, boronization was developed and tested at Jülich as a method of coating vacuum vessel walls, and subsequently implemented by all other fusion experiments throughout the world. In 1991, Jülich scientists implemented controlled radiation cooling at TEXTOR. This method allows the hot hydrogen plasma of up to 10 million degrees Celsius to be reduced to a temperature at the edge regions that the wall materials can withstand. Recently, tests and optimizations of wall elements made of tungsten contributed to the decision to use this metal in the international fusion reactor ITER, which is scheduled to go into operation in the south of France by 2020.

In the forefront: directors at the Instiute of Energy and Climate Research Prof. Ulrich Samm (left) and Prof. Christian Linsmeier (right). Source: Forschungszentrum Jülich
TEXTOR was primarily built and used to study the interactions between plasma and the vacuum vessel wall. With respect to plasma temperature and plasma density, the experiment was unable to reproduce the real operating conditions of a fusion power plant. TEXTOR was too small to do so. The device was also not suitable for exploring the problems associated with continuous operation. "And yet continuous operation is the remaining hurdle on the way towards a fusion power plant for electricity generation. Now that TEXTOR has been shut down, we will direct our full attention to overcoming this challenge," says Samm.


Jülich plasma physicists emphasized the new focus on the altered issues with a symbolic act. Yesterday, after TEXTOR's last plasma discharge, they pushed a button in its control centre: the control monitors then no longer showed the interior of the TEXTOR vacuum vessel, but images of the Jülich plasma generator PSI and other materials research set-ups. After all, the continuous operation of a fusion power plant will only be possible if suitable materials are available.


Jülich fusion researchers have been preparing for the shift in their research priorities for quite a while. For example, in March of this year, Forschungszentrum Jülich appointed Prof. Christian Linsmeier from the Max Planck Institute for Plasma Physics, Garching—an acclaimed materials researcher—second director of the subinstitute. In addition, the plasma physicists have been expanding their research activities outside of TEXTOR: at the very end, only 15 percent of the laboratory space was dedicated to the large-scale device. Jülich fusion researchers will also continue to work at international and European installations, particularly at the largest existing fusion experiment—JET in the UK. In addition to ITER and DEMO, the reactor generation after ITER, they are putting their expertise to good use at the Wendelstein 7-X stellarator in Greifswald—an alternative reactor type.


The dismantling of TEXTOR, which contains some 600 tonnes of metal, will take more than three years.


See the original text in English and in German.