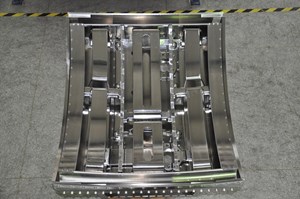 Building the ASDEX Upgrade ICRF antennas was a ''good exercise'' for ASIPP according to IPP's Helmut Fuenfgelder, opening the door for the institute to contribute to other devices such as WEST (France).
At the Chinese Institute of Plasma Physics ASIPP, a second ICRF heating antenna is packed and ready to be delivered to the ASDEX Upgrade Tokamak in Germany after passing the necessary factory acceptance tests late February.


Two new ICRF antennas (for ion cyclotron range of frequencies) designed to couple 2MW at a frequency between 30 and 60 MHz are being built in an international cooperation between the Max Planck Institute of Plasma Physics (IPP, Germany), ASIPP (China) and ENEA (Italy). ENEA is building the plasma-facing components of the antenna and a powerful diagnostic to measure the plasma density in front of it, while ASIPP is building all other components of the antennas.


According to Yang Qingxi, a 35-year-old Responsible Official from ASIPP, the manufacture of the two ICRF antennas was "arduous and tortuous" due to their complicated structure, demanding technical specifications, sophisticated engineering techniques and a tight schedule.


The ASIPP components of the first antenna, delivered to IPP in June, 2013, have already been complemented with some of the diagnostics parts from ENEA and are being test mounted in a full scale model of ASDEX Upgrade.


The components of the second ICRF antenna were examined and accepted by a three-member team from the Max Planck Institute of Plasma Physics (IPP) headed by Helmut Fuenfgelder during a visit at ASIPP from February 25 to 27. Helmut Fuenfgelder expressed his satisfaction with the quality of the second antenna to the ASIPP team led by Song Yuntao. "The first antenna was very good, and this one is even better." 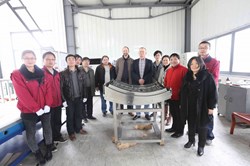 A three-member team from IPP headed by Helmut Fuenfgelder (sixth from right), visited China late February to examine and accept the second antenna.
The challenging task was successfully brought to conclusion through strong teamwork within the High Power Microwave Technology and Tokamak Design divisions, the ASIPP workshop and also through a large number of R&D tests on welding techniques and a special curve-shaped surface forming process.


Dozens of video discussions took place throughout the development process with IPP colleagues. The second antenna will arrive at its new home in Garching in a couple of weeks. After completion with ENEA components, both antennas will be installed in the ASDEX Upgrade in the next opening foreseen this year.