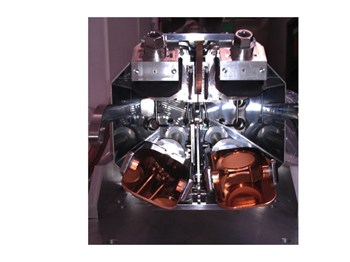 A look into the microwave launcher showing the steering mirrors that guide the beam into the plasma. Photo: PPPL
PPPL collaborations have been instrumental in developing a system to suppress instabilities that could degrade the performance of a fusion plasma. PPPL has built and installed such a system on the DIII-D Tokamak that General Atomics operates for the US Department of Energy in San Diego and on the Korea Superconducting Tokamak Advanced Research (KSTAR) facility in South Korea—and now is revising the KSTAR design to operate during extended plasma experiments. Suppressing instabilities will be vital for future fusion facilities such as ITER.


The system developed on DIII-D and then installed on KSTAR aims high-power microwave beams at instabilities called islands and generates electrical current that eliminates the islands. The process links software-controlled mirrors to detection equipment, creating a system that can respond to instabilities and suppress them within milliseconds. "It works like a scalpel that removes the island," said PPPL physicist Raffi Nazikian, the head of the Laboratory's collaboration with DIII-D.


Revising the unit on KSTAR calls for adding a water-cooling system to keep the mirrors that direct the high-power microwaves into the plasma from overheating. KSTAR's superconducting magnets can confine the plasma for up to 300 seconds during long-pulse experiments that reach temperatures far hotter than the 15-million degree Celsius core of the sun. "Once you get beyond 10 seconds you have to remove the heat as you put it in," said PPPL engineer Robert Ellis, who designed the copper and copper-and-steel mirrors.


Ellis was part of a team of PPPL physicists and engineers who worked closely with their counterparts at General Atomics to develop the original system on DIII-D. PPPL Physicist Egemen Kolemen, an expert in plasma control, created much of the software that automatically steers the mirrors and directs the microwave beams to their target. PPPL engineer Alexander Nagy also shared responsibility for the system, providing onsite support in San Diego.


The microwave beams not only remove instabilities, but enable researchers to mimic the way that the alpha particles produced by fusion reactions will heat the plasma in ITER. While current heating methods typically heat the ions in plasma, these microwave beams act on the electrons instead. This process parallels what will happen in ITER. "By putting microwave power into the electrons," Nazikian said, "we can experimentally simulate and study how a fusion plasma will be heated in ITER."


The revised KSTAR unit will extend such research to long-pulse plasma experiments when work on the water-cooled mirrors is completed later this year.