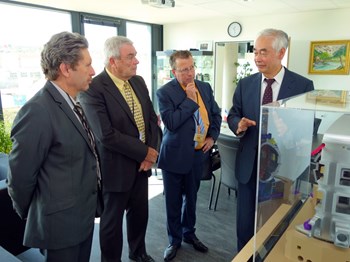 Although deeply rural, with one of the lowest GDPs in the country, the Alpes-de-Haute-Provence département is among the local contributors to ITER. Its president, Gilbert Sauvan (first left) visited ITER. Also on the picture, from left to right: vice-president of the département Roland Aubert, ITER Head of Communication Michel Claessens and ITER Director-General Osamu Motojima.
In July 2001, when France was already intent on having ITER built on a stretch of land adjacent to CEA-Cadarache, Roger Pizot, the mayor of Saint-Paul-lez-Durance, made a brilliant suggestion. Why not ask the local governments to contribute financially to the project?


The ITER Members at the time were only three*—Europe, Japan and Russia—and the project was billed at around EUR 6 billion.


In this context every kind of support, whether political or financial, was most welcome. Pizot's suggestion, once accepted, provided both: it brought EUR 467 million to the project and demonstrated the determination of the local governments of the Provence-Alpes-Côte d'Azur (PACA) Region to welcome the international scientific endeavour.


The PACA region is very diverse. Some of its six départements are relatively wealthy and heavily populated; others—deeply rural—have some of the lowest gross domestic product (GDP) in the country.


Despite differences in population and economic standing all six decided to contribute. For example the Bouches-du-Rhône (pop. 2 million), which ranks fifth out of 96 départements in terms of GDP, pledged EUR 152 million; and the Alpes-de-Haute-Provence (pop. 161,000) and the Hautes-Alpes (pop 138,000), respectively ninety-second and ninety-third in terms of GDP, pledged EUR 10 and EUR 5 million**.


In following Roger Pizot's suggestion, the local governments made a sound investment. The construction and service contracts awarded by the ITER Organization, Fusion for Energy and Agence Iter France to PACA-based companies since 2007 now amount to more than EUR 1.4 billion.


Companies in the rural Alpes-de-Haute-Provence département have reaped more than EUR 30 million in contracts—representing more than EUR 186 per inhabitant.


This is all very good news for Gilbert Sauvan, the president of the departmental council (Conseil général) since 2012 and a member of the French National Assembly who visited ITER on Thursday 17 April.


"We are very proud of having ITER here," he said. "The Project already acts as a strong booster for local and regional technological and economic development. At the national level however, and this is obvious from the ongoing energy debate at the National Assembly, there's clearly an information deficit on what ITER is really about. We have to work on that and I definitely will."


The impact of ITER on its local environment is already considerable. And it's only a beginning: as 16 new building projects get underway in the months to come and machine assembly kicks off, the number of workers on site in 2015 will reach 1,000 and continue to grow.


* The US, having pulled out of the project in 1998, would only return in 2003.
** The départements of Var, Vaucluse and Alpes-Maritimes; the regional council PACA and the Greater Aix-en-Provence metropolitan area also contributed.