When fusion was almost there

Share Tweet
When fusion was almost there
Fifty years ago, in 1964, human beings believed in progress. Manned space capsules were routinely sent into space, a revolutionary supersonic commercial airliner was nearing the prototype stage, the computer mouse had just been invented, and the official decision had been taken to build a cross-Channel tunnel.


Nothing epitomized this optimistic and conquering mood more than the 1964 New York World's Fair. Dedicated to "Man's Achievement on a Shrinking Globe in an Expanding Universe," the huge exhibition showcased and exalted the promises of mid-twentieth century technologies. Fusion energy was present, staged and dramatized in the spectacular Progressland pavilion by General Electric and the Walt Disney Studios. 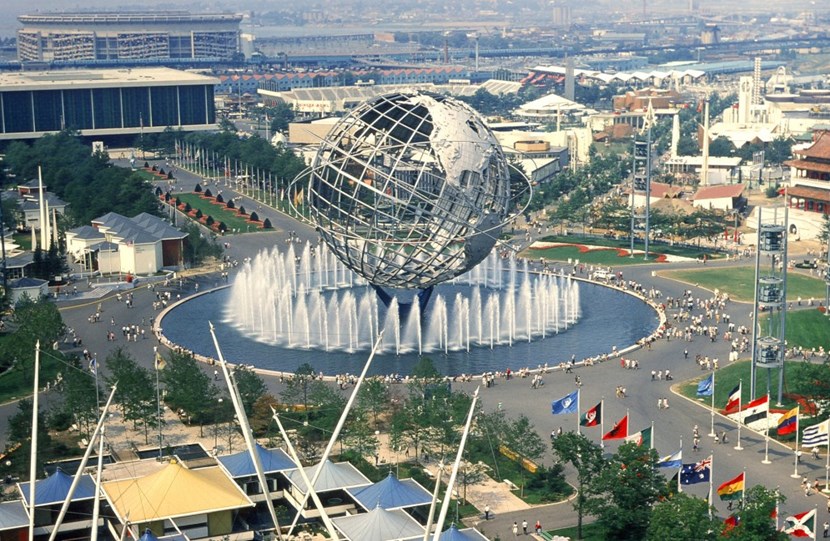 Dedicated to ''Man's Achievement on a Shrinking Globe in an Expanding Universe,'' the 1964 New York World's Fair opened on 22 April in Flushing Meadows. One of its most spectacular attractions was General Electric's Progressland where the Fusion Demonstration was performed non-stop.
General Electric had entered fusion research as early as 1956, at a time when physicists such as Amasa S. Bishop, director of the US program in controlled fusion (Project Sherwood), were convinced that "with ingenuity, hard work, and a sprinkling of good luck, it even seems reasonable to hope that a full-scale, power-producing thermonuclear device may be built within the next decade or two." 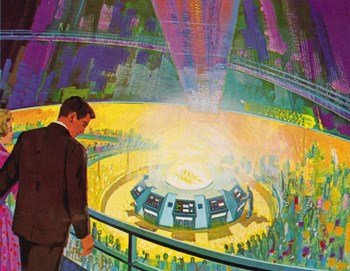 ''After a countdown, brilliant flashes of light and a loud popping crack would signify that GE was successful in tapping into the nuclear science of sun building,'' writes a Disney historian, recalling the magic of the Fusion Demonstration experience.
In April 1964, the "next decade" had arrived and, with the help of Disney's design experts, General Electric produced the Nuclear Fusion Demonstration, one of the Fair's most exciting attractions.


Here's how it was described in the New York World's Fair Official Guide: "In the first demonstration of controlled thermonuclear fusion to be witnessed by a large general audience, a magnetic field squeezes a plasma of deuterium gas for a few millionths of a second at a temperature of 20 million degrees Fahrenheit. There is a vivid flash and a loud report as atoms collide, creating free energy (evidenced on instruments)."


The "fusion bangs," which occurred every 4-6 minutes, were loud enough to leave a lasting impression on the visitors. "After a countdown, brilliant flashes of light and a loud popping crack would signify that GE was successful in tapping into the nuclear science of sun building," writes a Disney historian. "Clerical workers who staffed the pavilion soon grew accustomed to the loud explosions emanating from the dome." Many years after Progressland had closed and moved to Disneyland, they still had a vivid  memory of the experience.


Where did these "loud popping cracks" come from? Certainly not from the "collision of atoms" in the fusion installation (a theta-pinch fusion device) that stood on a plinth at the centre of a large amphitheatre. More probably, they emanated from the discharging of the capacitor bank that fed power to the device. 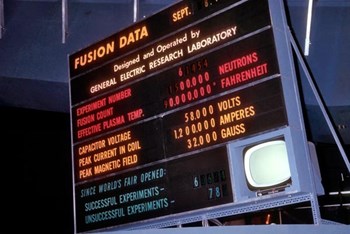 Connected to the theta-pinch fusion device that stood on a plinth at the centre of a large amphitheatre, this control screen provided the public with real-time information.
The Fusion Demonstration left many visitors convinced that fusion-generated electricity was at hand, which of course did not reflect the actual state of fusion research. As General Electric reviewed its corporate involvement in fusion one year later, it concluded that "the likelihood of an economically successful fusion electricity station being developed in the foreseeable future is small."


In order to hasten the "foreseeable future," fusion physicists needed to delve more deeply into the complexities of plasma behaviour. And they did: contrary to General Electric's pessimistic conclusion, the decade that followed the 1964 World's Fair was one of spectacular progress not only in fundamental physics but also in fusion technology.


With the advent of the tokamak—a Russian concept soon adopted by the worldwide fusion community—and an understanding of the scaling laws that rule energy confinement, researchers were able to dramatically improve performance. The "foreseeable future" was back; in 2014, it is closer than ever.