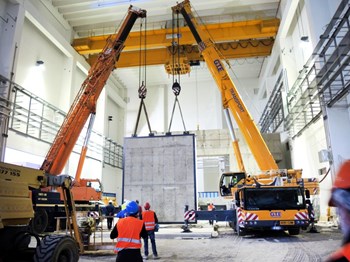 Workers installed the main door of the SPIDER bioshield in April. Sliding along rails, this 120-tonne door will be the point of entry for component installation.
In the industrial outskirts of Padua, Italy, about 40 kilometres west of Venice, the long white buildings of the PRIMA Neutral Beam Test Facility are now ready to receive equipment, after a little over a year of construction activity.


At PRIMA, the components of ITER's most powerful heating system—neutral beam injection—will be tested in advance of ITER operation.  Europe, Japan and India are contributing all components according to the specifications of Procurement Arrangements signed with the ITER Organization; Italy is building the facility as a voluntary contribution to the neutral beam development program. The PRIMA facility is hosted by Consorzio RFX, an Italian research laboratory for plasma physics and controlled nuclear fusion.


Two test beds at PRIMA will help resolve challenging physics and technology issues and validate concepts before the neutral beam system is built at ITER. The first, SPIDER, will operate an ITER-scale radio-frequency negative ion source. After approximately two years from the start of SPIDER, a second facility, MITICA, will enter operation to test the 1:1-scale neutral beam injector at full acceleration voltage and power. 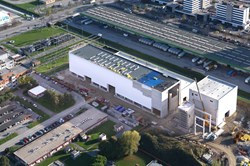 In Padua, Italy, the PRIMA complex will house the SPIDER and MITICA experiments, as well as facilities for power supplies, cryogenics, and cooling. Europe, Japan and India—which all have significant experience with neutral beam technology—are contributing the components based on specifications provided by the ITER Organization.
Fabrication is now underway for all SPIDER components. Factory acceptance tests on the vacuum vessel are planned mid-year in Europe; delivery of the 100 kV power supply and beam dump (part of the Indian contribution) is expected at the end of year according to plan. For MITICA, all of the build-to-print mechanical components have reached the final design stage and were presented for review in January 2014. Following chit resolution, procurement of these components will be launched by the European Domestic Agency.


"This ambitious development program for neutral beam heating will allow us to acquire valuable information about neutral beam manufacturability and operation before we are called on to install and operate two heating neutral beam (HNB) injectors in ITER, as well as the diagnostics neutral beam (DNB)," says Deirdre Boilson, head of the Heating & Current Drive Division at ITER. "Already, as manufacturing for SPIDER is underway, we are learning important technical lessons that will directly serve the manufacturability of the beam sources of the DNB and HNBs."


All of the components for the PRIMA test beds belong to the ITER Organization. Once they've been delivered to the site in Padua and have passed acceptance tests, ownership responsibility will be transferred to the European Domestic Agency for the duration of SPIDER and MITICA operation.


"Neutral beam technology is key for ITER, but also for the next-stage fusion device," says Deirdre. "We're looking forward to PRIMA's experimental results, based on which we'll be able to move forward with full confidence to install and operate the neutral beam injectors on ITER."

Studying negative ion beam technology at ELISE
At the Max Planck Institute for Plasma Science (IPP) in Garching, Germany, experiments underway on a half-size radio-frequency-driven negative ion source, ELISE, have made important contributions to the design of SPIDER and MITICA and to their future operation. In addition to this important research input, the R&D program funded by the European Domestic Agency is also making another important contribution to the neutral beam development program: offering important training opportunities to the scientists and engineers from Consorzio RFX.


Watch a recent video on ELISE from the European Domestic Agency here.