How niobium-tin came out of the niche 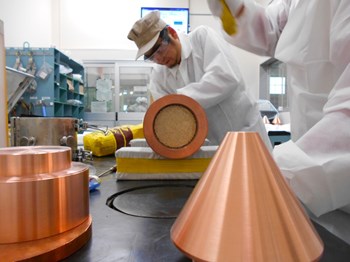 Until a few years ago, niobium-tin production worldwide did nor exceed 15 tonnes per year. As the ITER machine will absorb 600 tonnes of niobium-tin strands, production had to be stepped up by one order of magnitude
The superconducting capabilities of niobium-tin compound were discovered in the mid-1950s and for the better part of five decades its principal application was in the niche area of high field laboratory magnets.


Due to their capacity to operate at large currents and strong magnetic fields, niobium-tin magnets were central to the development of a new generation of more precise nuclear magnetic resonance (NMR) systems in the 1980s and 1990s.


The demand for high-performance niobium-tin dramatically increased a few years ago when procurement for the ITER Project was launched. Production worldwide, which hadn't exceeded 15 tonnes per year, had to ramp up to meet the demand of one single machine. Together, ITER's toroidal field and central solenoid magnet systems will absorb more than 600 tonnes of niobium-tin strands.


In order to meet these demands, ITER had to step up the world production of niobium-tin strands by one order of magnitude—both an opportunity for the market to develop but also a challenge to enforce uniform quality assurance and quality controls standards for all the players. In total, nine suppliers in six countries have taken part in ITER niobium-tin strand production.


JASTEC (Japan) is one of them. An offspring of Kobe Steel Ltd., the company was established in 2002 to specialize in superconducting strand and magnets for NMR medical equipment. In 2008, JASTEC won a contract from the Japanese Domestic Agency for ITER for 20 tonnes of chromium-plated niobium-tin strands destined for the toroidal field magnets. The company delivered the first 50 kilos of the order one year later.


In 2013, following the signature of a second contract, the company began producing niobium-tin strand for the ITER central solenoid. 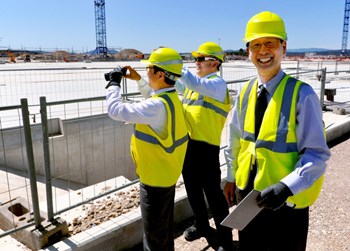 Accompanied by Yasuno Yokota, General Manager, sales and Dai Ikegaya, General Manager of the wire factory, JASTEC President Yoshiro Nishimoto (right) visited ITER on 9 May.
"We had proved our capability in niobium-tin for NMR with very high field," explained Yoshiro Nishimoto, the company's president, on the occasion of a recent visit to ITER. "We took on this work because we wanted to contribute to this great project. We made heavy investments and today, the ITER contracts account for half of our production."


The company, which is also involved in the fabrication of ITER gyrotrons, hopes that large-scale industrial markets will open up after ITER. "Fusion energy is very promising. I may not see its implementation," says the JASTEC president, "but our company certainly will."


Over the past six years, a strong and productive relationship was established between JASTEC, the Japanese Domestic Agency and the ITER Organization. "Our collaboration is a good example of how the ITER in-kind procurement process can be successfully implemented, says Arnaud Devred, who heads the Superconductor Systems & Auxiliaries Section at ITER".