40 journalists, 15 countries and lots of explanations 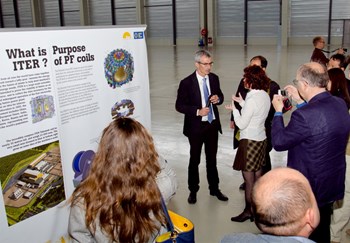 Over two days, more than 40 journalists from 15 countries attended presentations, met project actors and got as close as possible to ongoing construction activity on the ITER site (here in the Poloidal Field Coils building, listening to explanations provided by Laurent Patisson, head of the Nuclear Buildings Section at ITER.)
ITER is a strange object. It is both experimental and huge. It is taking shape in the foothills of the southern French Alps, but also in factories all over the world. It is nuclear—but not of the kind of nuclear we are accustomed to. It is both a culmination and a beginning. And it is utterly complex in almost all of its dimensions: scientific, technological, financial, cultural, organizational ...


Early this week at ITER, these different aspects of the project were presented to more than 40 journalists from 15 countries (Japan, Korea, Canada, Russia, Europe...) Over two days, the journalists attended presentations, met project actors, got as close as possible to ongoing construction activity, toured the nearby Tore Supra tokamak, and had a chance to visit a European manufacturing facility near Toulon (CNIM, in La-Seyne-sur-Mer) where series production has started on the huge radial plates for the toroidal field coils.


Many of the journalists had little prior knowledge of the project. "There are many misunderstandings about ITER," explained Hiroaki Miyagawa of the Japanese daily Mainichi Shimbun (circ. 6 million). "It is not easy for the public to distinguish between fusion and fission. But after spending two days here, I feel quite motivated to do it!" 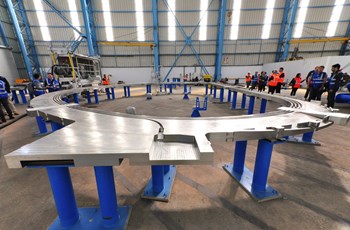 The party of journalists also toured the CNIM manufacturing near Toulon (La-Seyne-sur-Mer) where series production has started on the huge radial plates for the toroidal field coils.
Alexandra Borisova, a science journalist for the Russian website gazeta.ru who closely follows the activity of the Russian Domestic Agency, draws a parallel between the quest for fusion energy and that of the Higgs boson, which she also covered. "Projects become loud when they produce results," she said, "so I'm not surprised that ITER—despite its dimension and stakes—is not yet very visible to the general public. I know that will change and, 20 years from now, I will proudly tell people that I was there when ITER was just a big hole in the ground!"


Many, like Sorina Buzatu of youris.com, a non-profit media agency that focuses on projects funded by the European Union, sensed both the difficulties of the project and the optimism of the scientists and engineers she talked to. "I felt there was a good measure of confidence. And I leave ITER convinced that we will eventually have fusion energy."


In the view of a freelance reporter with a long experience covering the antinuclear movement, the complexity of ITER is such that "a thousand things could go wrong before an actual fusion plasma is produced..." and reflected: "Well, I probably would have felt the same 40 years ago about the Apollo program..."


A press trip is not intended to convince, but rather to explain. The one that brought the world media to ITER on 12-14 May did a lot of that and, judging by the information tweeted in real time by the participants and by the first articles published in the press, managed to generate quite a bit of interest.