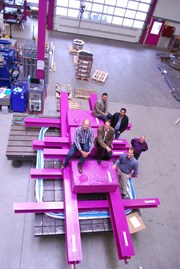 Pink steel and concrete weights reproduce the force of the relative movements that the 85 ITER bellows will have to withstand during operation of the Tokamak. Adding their weight to the ensemble: Igor Sekachev and Guillaume Vitupier (ITER Organization), Girish Kumar Gupta and Anil Bhardwaj (ITER India), and Werner Löhrer and Reto Löhrer (Kompaflex AG).
Pink is a colour that is not often used in the world of heavy industry, but special requests sometimes call for special measures. And so the Swiss company Kompaflex chose pink for its successful test campaign of ITER's mighty bellows.


Eighty-five large, rectangular bellows will be used between the ITER vacuum vessel, the cryostat and the walls of the Tokamak Building themselves to isolate the ultra-high vacuum inside the cryostat from the building port cell environment, and to compensate relative movement that can occur during different operational regimes and events (baking, cooldown).


The bellows will be made of multiple thin layers of 304/304L or Inconel steel that can absorb movements between the different structures up to a level of about 50 millimetres.

Large bellows will be used between the cryostat and the vacuum vessel—and between the cryostat and the building—to allow for thermal contraction and expansion in the structures.
In order to confirm design readiness and to determine the feasibility of bellow manufacturing, an engineering contract was awarded to the Swiss expansion joint specialist Kompaflex AG based in Steinebrunn, near the shores of Lake Constance.


On 15 May, a full scale prototype bellow (shown as blue in the graphic at left), measuring 3.6 x 3.2 metres, was tested in the presence of representatives from the ITER Organization and the Indian Domestic Agency—the ITER Member that will have the responsibility of finally procuring the components.


The large weights of steel and concrete in the picture (painted pink) give an idea of the resulting force from the combined spring rates due to different relative movements. These spring rates were determined by design calculations, FEM analysis (used commonly in engineering) and 1:1 testing, and confirmed during the recent test campaign. Further tests on the prototype will follow to measure its stability under vacuum and to test helium leakage.