A perfect day for pouring 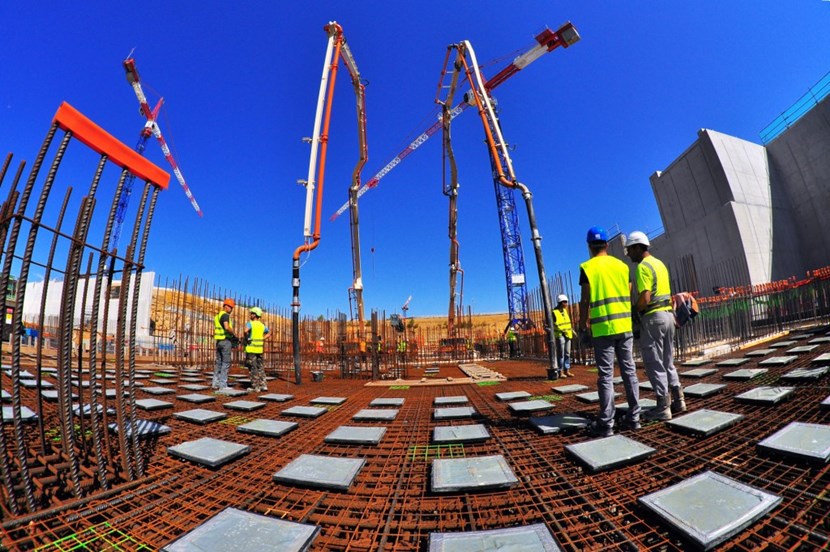 It takes a fisheye lens, which makes the steel reinforcement appear a bit distorted, to take in the whole of the concrete pouring scene for the Tritium Building slab ...
In the scope of a regular building project, concrete pouring is a commonplace operation. For an ITER building, however, it is the culmination of months of calculations, modellization and painstaking preparation.


"It's a moment of great pleasure and relief," admits Laurent Patisson, Nuclear Buildings Section leader at ITER. "For a short time, the paperwork is over and we're into the real thing."


What added to his sense of satisfaction last Thursday 19 June, as a second segment of the Tritium Building slab was poured on the north side of the Tokamak Pit, was the weather. For both the workers and the concrete, the conditions were just perfect.


Unlike during pouring events scheduled mid-winter or high-summer, the concrete coming out of the on-site batching plant didn't require warming or cooling. Like a good wine, it was served at room temperature.


Operations began at 6:45 a.m. and followed a strict procedure detailed in a five-page program. Two giant 47-metre pumps, capable of delivering 50 cubic metres of concrete per hour, were guided from north to south, progressively filling the steel reinforcement structure with 1,155 cubic metres of specially formulated concrete.


Four layers were poured successively, each followed by vibrating operations, for a total height of 1.5 metres. By midnight, the 770 square metres of plot #12 were filled. The next morning, the surface of the new concrete was flooded to prevent dehydration and the possible creation of micro-cracks on the concrete "skin." The plot's surface will remain underwater for at least 10 days—a phase known as concrete curing.


The remaining, central segment of the Tritium Building slab should be poured in the coming week. Then, sometime in the summer, it will be time to celebrate an even bigger moment of "pleasure and relief": the pouring of the first segment of the Tokamak Building slab, following the green light to proceed from the French Nuclear Safety Authority.