Why would financiers support ITER? 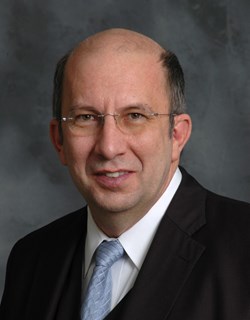 For Daniel T. Allen, president of the international financial firm Aliier, fusion is the ''most exciting and most promising technology on the horizon for actually solving the energy problem.''
Daniel T. Allen has been involved with finance and international business development for almost a quarter century. He is president of Aliier, the international financial firm running Aliier Passport™, which provides fund managers an open architecture regulatory umbrella for access into global financial markets. Mr. Allen speaks at numerous conferences and has spoken at both the NYSE EURONEXT and NASDAQ. He is passionate about sustainability as well as environment, social and governance (ESG) investing issues and has written a number of articles. We first met Mr Allen at the Monaco ITER International Fusion Energy Days in Monaco (December 2013) where he looked at fusion from the financial angle ("Why would financiers support ITER?").


As a financier, can you tell us why you are interested in fusion?


The world today is experiencing dramatic changes in lifestyle, standards of living and technological growth. Emerging markets are developing ever more rapidly and the United Nations is predicting the global population will hit around 8.9 billion by 2050 and possibly 12 billion by 2100. All of this will dramatically increase energy demands. If nothing changes, a doubling of our population will double our energy demands—but of course the fact is that much of the world is becoming rapidly more sophisticated and technology continues to advance with increasing numbers of energy-devouring gadgets. Realistically, energy demands by 2100 will likely be three to five times what they are today. Energy, along with water and climate change, will likely be the primary financial drivers of our world going forward.


As I look across the technological landscape, the most exciting and most promising technology on the horizon for actually solving the energy problem is unquestionably fusion. Safe, industrial-scale, relatively cheap compared to the vast sums being put into other alternatives ... and it should, if the public is educated, avoid some of the public relations challenges some technologies have faced.


During your presentation in Monaco, you made some very strong statements such as, "I personally believe that the fusion effort will set the course for the rest of human history."


That's right. I firmly believe that a visionary leader, knowledgeable in the fusion approach, could get a commercial fusion reactor design ready for production in ten years. Boeing spent $32 billion on the Dreamliner and every year we are spending many times that on other "alternatives" such as wind and solar. Fusion will make every nation energy independent and that makes it an incredibly disruptive technology. A true shift in energy away from fossil fuels will have major impacts on a number of industries. If electricity could be made abundant enough, we might be able to shift to a hydrogen economy.


To plagiarize from Nike a bit, we need to "just do it." We need for a modern statesman somewhere in the world to step forward. Just as there was a call for the building of the Panama Canal, a Manhattan Project, or the Apollo Project, there needs to be a clarion call for mankind to conquer the technology of fusion. Not in thirty years or even twenty. We need to set ourselves to doing it in ten years. In 1961 when Kennedy addressed Congress and set a goal of putting a man on the moon by the end of that decade, many in the scientific community thought that he was crazy. In 1969, Neil Armstrong stood on the moon. In ten years, 2024, if we decide to just do it, mankind will be standing on a brave new world weaning itself from a long addiction to fossil fuels. The message that needs to start emitting from the fusion community is that it is time to get serious and the fusion community is ready.


On the other hand, you had some strong messages to the fusion community, saying that something needs to change fundamentally in the way fusion is portrayed to the public?


I think it is very important that fusion proponents "go to the street." Brilliant fusion scientists speaking with brilliant fusion scientists makes for fascinating conversation, but it doesn't move the ball forward. I read one estimate that the US alone spent a trillion dollars, public and private, developing wind and solar from 2000 to 2010. That happened because the public was engaged, social media was engaged and those programs are widely supported politically. What would have happened to fusion, if during the same period, those resources had gone into fusion? As I said before, I think we need to change the way we think and speak about fusion. Fusion needs to get done and, frankly, should have already happened. Perhaps it is time to go to social media, talk shows, widely read non-scientific publications and talk about what could happen if the support was there. It is critically important that the vision be painted for people.


When will fusion appear on the radar screen of financiers? And how might this impact the fusion endeavour?


Perhaps it is because I read too much Heinlein, Asimov, Clarke and Sagan as a child that I am such an early supporter of the fusion effort but I do think fusion is already starting to hover on the edges of the consciousness of the broader financial world. Climate change and geopolitical threats to the energy status quo are making a transition away from our current energy profile an imperative. The biggest obstacle to fusion being on the radar screen, frankly, is that most people outside of the science community, and some within for that matter, simply do not believe that it is possible. Again, if you actually believe in the technology, embrace the possibility and tell us what you believe can actually be done and momentum will build. Personally, I would like to see a broad call for fast-tracking the process and having a commercial design ready by 2024.