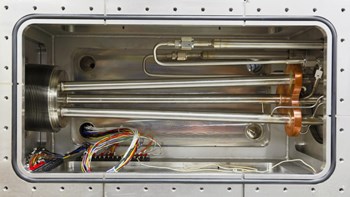 A three-barrel pellet injector developed at Oak Ridge National Laboratory for the ITER disruption mitigation system. Photo: US ITER/ORNL
The international ITER fusion project is building "a sun on earth" that will produce a self-heated, burning plasma—a key step toward industrial-scale fusion energy production. Controlling that plasma can be tricky, though, because disruptions may occur that cool and collapse the plasma. Sudden losses of plasma energy and current have the potential to erode plasma-facing components inside the ITER vacuum vessel.


US ITER researchers based at the Department of Energy's Oak Ridge National Laboratory are leading the development of a disruption mitigation system to reduce the effects of plasma disruptions. The United States Domestic Agency for ITER signed a formal arrangement with the ITER Organization on 29 July 2014 for the work.


"We have a very conservative and flexible approach to disruption mitigation on ITER," said Larry Baylor, a distinguished scientist in plasma technologies and applications at ORNL, "with different locations for material to be injected, different types of material, and different response times. We are also designing the system in a way that will allow for evolution of the mitigation technology." 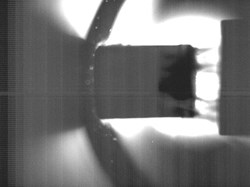 A 16 mm neon—deuterium pellet, indicated by an arrow, captured with a high speed camera as it travels from left to right at about 300 metres per second in a test stand at the Oak Ridge National Laboratory Pellet Lab. Photo: ORNL
Two approaches have been developed to help reduce the effects of plasma disruptions: massive gas injection and shattered pellet injection. Both deliver material to the plasma within milliseconds. By injecting material to the plasma, ITER operators will be able to manage plasma energy in a way that lessens thermal loads and mechanical stresses on the plasma-facing components of the machine. The injected material can also inhibit the formation of runaway electrons, which occur when electrons are accelerated by the electric field in the plasma during a disruption.


The gas will be neon, argon, deuterium or helium; the pellets will typically be composed of neon with a deuterium outer layer. The pellets are shattered against a plate as they enter the vacuum vessel in order to better disperse the material into the plasma.


First-of-a-kind achievements have already emerged from the US ITER and ORNL team, including the largest cryogenic frozen hydrogen pellet ever formed and fired by a pellet injector "gun" (25 mm in diameter) and a novel three-barrel pellet injector for delivering the pellets to the plasma. The pellet guns use a gas propellant to fire pellets at 300 metres per second, or about 670 miles per hour.


The team is now at work making even larger cryogenic pellets—up to 41 mm in diameter—that can still maintain the necessary speed to deliver material to the plasma within milliseconds of a disruption.


Read the full article on the US ITER website.