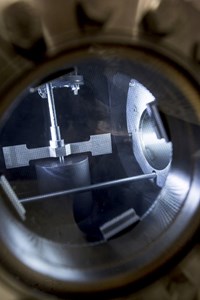 Close-up view of the high-speed propellor inside the injector. (Photo by Elle Starkman/Princeton Office of Communications )
The Princeton Plasma Physics Laboratory (PPPL) has successfully tested a laboratory-designed device to be used to diminish the size of instabilities known as "edge localized modes (ELMs)" on the DIII-D tokamak that General Atomics operates for the US Department of Energy in San Diego. Such instabilities can damage the interior of fusion facilities.


The PPPL device injects granular lithium particles into tokamak plasmas to increase the frequency of the ELMs. The method aims to make the ELMs smaller and reduce the amount of heat that strikes the divertor that exhausts heat in fusion facilities.


The system could serve as a possible model for mitigating ELMs on ITER, the fusion facility under construction in France to demonstrate the feasibility of fusion energy.


"ELMs are a big issue for ITER," said Mickey Wade, director of the DIII-D national fusion program at General Atomics. Large-scale ELMs, he noted, could melt plasma-facing components inside the ITER Tokamak.


General Atomics plans to install the PPPL-designed device, developed by physicist Dennis Mansfield and engineer Lane Roquemore, on DIII-D this fall. Previous experiments using deuterium-injection rather than lithium-injection have demonstrated the ability to increase the ELMs frequency on DIII-D, the ASDEX-Upgrade in Germany and the Joint European Torus in the United Kingdom.


Researchers at DIII-D now want to see how the results for lithium-injection compare with those obtained in the deuterium experiments on the San Diego facility. "We want to put them side-by-side," Wade said.


PPPL-designed systems have proven successful in mitigating ELMs on the EAST tokamak in Hefei, China, and have been used on a facility operated by the Italian National Agency for New Technologies in Frascati, Italy. A system also is planned for PPPL's National Spherical Torus Experiment (NSTX), the laboratory's major fusion experiment, which is undergoing a $94 million upgrade.