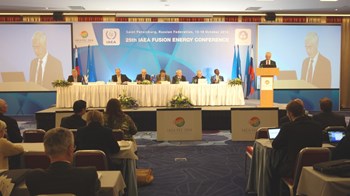 The 25th IAEA Fusion Energy Conference was held in St Petersburg from 13-18 October 2014. ''The development of fusion energy has the potential to change the fate of mankind,'' said the ITER Director-General, Osamu Motojima, during the opening ceremony.
It was in 1968 in Novosibirsk, at the third Fusion Energy Conference hosted by the International Atomic Energy Agency (IAEA), that Russian Academician Lev Artsimovich from the Kurchatov Institute presented some amazing results from the T3 Tokamak: a confined plasma with electron energies up to 1 keV had been achieved, corresponding to temperatures of more than ten million degrees. The news was received at first with considerable skepticism, the fusion physicists who were present remember. But the breaking news proved to be correct and led to a global shift in nuclear fusion research.

Participants had the chance to tour the exhibition and attend the many presentations and posters on scientific and technological developments in fusion. ''Saturated Low-n Kink peeling Mode'' or ''Electron Bernstein Wave Heating'' anyone?
"The world has moved on and so has the development of fusion energy," said Alexander Bychkov, the IAEA Deputy Director-General, in his opening speech. "With ITER under construction in the south of France and plans for DEMO reactors being developed around the world, the focus of nuclear fusion research is slowly shifting from pure research to technology, material science and engineering. This does not mean that pure research is becoming less important, but that other aspects increasingly have to be taken into account as well. In the future, when ITER will start operation and when DEMO reactors are being designed, the questions of safety, security and even safeguards will grow in importance."


Qualifying ITER as "one of the most promising projects of our time," the Deputy Director General of Rosatom, Vyacheslav Pershukov, introduced ITER Director-General Osamu Motojima, who reported the latest project achievements including the completion of the lower basemat of the ITER Tokamak Complex and the arrival of the first machine components on site. "Ninety percent of the project's in-kind procurement value is now under contract," the Director-General stressed.


Although there were no game-changing results reported at the 25th Fusion Energy Conference, there was plenty of news that "expands the frontier of fusion," according to Richard Buttery, Director of the DIII-D Experimental Science Division (US). The number of presentations and posters covering progress in fusion materials such as tungsten reflected the importance of this field of research. Assessments of technological developments in fusion and studies of plasma behavior under extreme conditions were also well represented. The ITER Organization, with 7 oral presentations, 24 posters and 54 papers, did its part to contribute to the expansion of the fusion frontier.