IAEA Bychkov: "It's part of our mandate to make fusion power a reality" 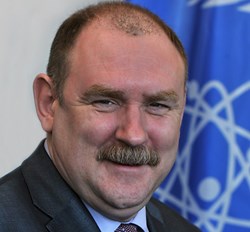 The Deputy Director General of the IAEA, Alexander Bychkov, sees it as part of the IAEA mandate to ''help make fusion power a reality.''
Alexander Victorovich Bychkov joined the International Atomic Energy Agency (IAEA) as Deputy Director General and Head of the Department of Nuclear Energy in February 2011. Before he joined the Agency, Mr Bychkov worked on molten salt chemistry, the chemistry and technology of actinides and nuclear fuel, and all aspects of fast reactor fuel cycles. At the recent IAEA Fusion Energy Conference in St. Petersburg, Newsline had the opportunity to talk to him about the Agency's involvement in fusion research and development.


Mr Bychkov, can it be said that nuclear fusion has been part of the IAEA's mission since the very beginning?


That is correct; the IAEA is proud to have played a constructive role in the history of nuclear fusion research. The Agency's motto "Atoms for Peace," coined by US President Dwight Eisenhower in his address to the UN General Assembly on 8 December 1953, has always had a special meaning for nuclear fusion: the obligation to work for the preservation of peace itself, and at the same time to work towards the peaceful use of nuclear fusion for the generation of energy.


The first Fusion Energy Conference (FEC) took place in 1961, in Salzburg, Austria. Seven years later, in 1968, the fusion community convened in Novosibirsk where some breaking news from the T3 Tokamak became part of fusion history. In 2014, for its 25th edition, the FEC returned to Russia, this time to St. Petersburg. What are your thoughts about this?


The 2014 FEC conference was only the second of 25 to take place in Russia. As you mentioned, at the 1968 conference in Novosibirsk some amazing results from the Russian T3 Tokamak (Kurchatov Institute) were presented—a confined plasma with electron energies up to 1 keV, corresponding to temperatures of more than 10 million degrees. This surprising and crucial result led to a global shift in nuclear fusion research towards the use of tokamaks. In Europe, this ultimately led to the design and construction of the Joint European Torus, JET, while in the US it led to the TFTR tokamak and in Japan to the JT60 tokamak. These machines, in turn, became the technological predecessors of today´s ITER Project.


And yes, St. Petersburg is a very special place for us Russians as it was the setting for three Russian revolutions: the revolution in 1905 and the uprisings in 1917 (to me these were three revolutions). So, perhaps we can see the 25th FEC conference as a symbolic event, where scientists and engineers met to talk about a technological revolution.


What is the IAEA's current involvement in fusion?


We are not in the position to play a leading role in the scientific and technical development, but we collect and distribute information and we facilitate collaboration. For example the FEC conference that the Agency organizes every two years is the largest of its kind. Likewise, we publish the leading journal on fusion, the Nuclear Fusion Journal, and offer an important resource to researchers, the FENDL database. We organize some research activities through our Coordinated Research Projects and carry out training activities, for example joint experiments at a tokamak—in particular for researchers from developing countries. We try to ensure that developing countries remain in touch with developments in fusion research by making sure that their researchers can participate in conferences and meetings.


Do you see interest from other nations to join the fusion community?


Yes, a number of developing countries attended the 25th FEC conference, such as Nigeria or Thailand, who as yet do not have fusion programs. These countries have an interest in fusion technology and, in view of the current effort to build up the educational level in many of these countries, some will join the fusion community sooner or later.


The IAEA is also very much engaged in activities for DEMO, the next step after ITER. How do you see the IAEA's role in this development effort?


Our Member States underline every year that fusion is considered as the future of nuclear power. While we do not yet consider fusion as a real part of the energy mix before 2050, it is part of our projections of nuclear power.


With regard to DEMO we are increasing our activities. We have started a new DEMO Workshop Series that brings together about 80 experts from around the world once a year. For the future we hope that the Agency can play a similar constructive role for DEMO as we have for ITER—even if DEMO will not be a single project, but rather a collection of projects. We do see it as part of our mandate to help make fusion power a reality.