Inserting the ship into the bottle

Share Tweet
Inserting the ship into the bottle
Installing a divertor cassette in the ITER vacuum vessel will be like inserting a model ship into a bottle. Both operations require careful planning, dexterity and millimetric precision within severe space constraints. But where a model ship is meant to remain in the bottle forever, the 54 divertor cassettes need to be replaced at least once during ITER's lifetime. 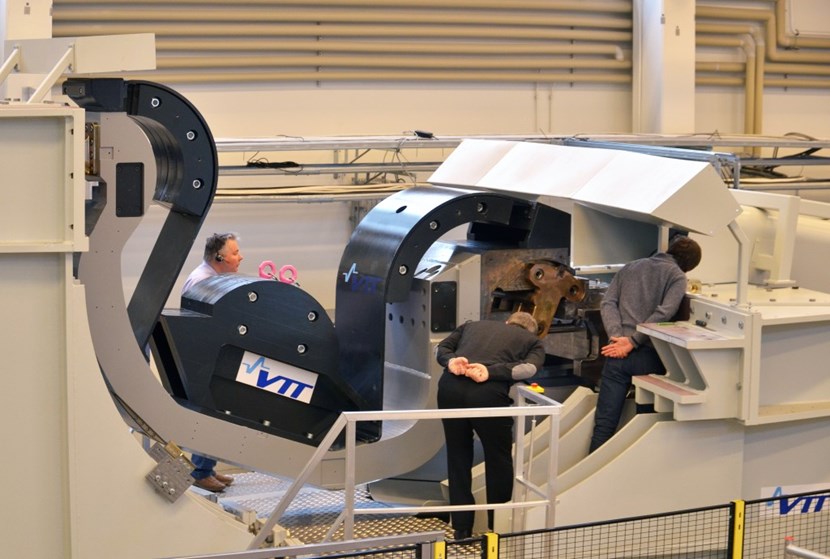 At VTT Tampere in February, twenty years of effort, ingenuity and technological innovation culminated in the final demonstration of remote handling prowess—the exchange of a divertor central cassette, an operation require careful planning, dexterity and millimetric precision.
Like the old mariner's bottle for the model ship, the vacuum vessel structure will provide the support for the divertor. As a consequence, the nine sectors of the vacuum vessel have to come first in the assembly sequence and be welded together before the installation of the divertor can begin. That leaves only three relatively narrow passageways into the vacuum vessel (the lower remote-handling ports) for divertor installation.


In 1994, when ITER was still in the early stages of its Engineering Design Activities, development began on the procedures, software and machinery capable of handling the delicate task of conveying the 54 segments of the divertor, called "cassette assemblies," through the port openings and into position at the bottom of the vessel as part of a perfectly circular arrangement.


At the time, the ITER machine, still a paper project, was twice the size of what it is today and each divertor cassette weighed 25 tonnes.

The ITER divertor sits in a circular arrangement at the bottom of the vacuum vessel. Its function is to keep the plasma clean by collecting (thanks to a specific magnetic topology) the impurities of the plasma and the helium "ash" of the fusion reaction. This massive, actively-cooled structure is exposed to an extremely high heat load — ten times higher than that of a spacecraft re-entering Earth's atmosphere.

The first Divertor Test Platform was established in the ENEA centre of Brasimone, Italy, under the auspices of the European Fusion Development Agreement (EFDA). As ITER was downsized to its present parameters (and divertor cassette weight had dropped to about 10 tonnes), the challenge was passed on to a team of international experts and a second Divertor Test Platform (DTP2) was established at the VTT Technical Research Centre in Tampere, Finland, some 180 kilometres northwest of Helsinki.


Three weeks ago, just as Finland was coming out of its long subarctic winter, twenty years of effort, ingenuity and technological innovation culminated in a final demonstration: the insertion of a central cassette mockup into (and removal from) its dockings inside of a 1:1 scale section of the ITER vacuum vessel.


Four years after having demonstrated the faultless exchange of two other types of divertor cassettes (standard cassettes and second cassettes), the loop had come to a close. "This was the last operation that needed to be demonstrated and also the most challenging as the three central cassettes they must close the circular arrangement of the divertor assembly," said Mario Merola, ITER Internal Components Division head, as clapping resounded in the vast hall that hosts the test stand.

Once ITER enters deuterium-tritium operation, the neutron flux from the fusion reactions will progressively activate the inner components of the machine and all operations (maintenance, inspection, repair, exchange, etc.) will have to be performed by remote handling.

The event also carried a strong significance for the representatives of the European Domestic Agency for ITER, also present in the DTP2 hall. After years of European-financed R&D on the ITER remote handling systems (design, mockup fabrication and demonstrations), the time had come to pass the challenge on to industry — in June 2014, Europe signed a EUR 40 million contract with a partnership of laboratories and companies led by Assystem(2) for the design, manufacturing, delivery, on-site integration, commissioning and final acceptance tests for the ITER Divertor Remote Handling system.


In the DTP2 control room, a few steps away from the 20-metre-long cassette multifunction mover, VTT senior researcher Hannu Saarinen sits, eyes riveted to an array of screens. To his left, a large virtual image shows the progression of the cassette inside the narrow tunnel of the port; on smaller screens, below, numbers and figures scroll endlessly. Without a way to fit a camera into the tunnel, all information is based on sensors and virtual reality; without it, operators would be blind. "More than 80 percent of the operation is pre-programmed," explains Saarinen. "We use the joystick only for small adjustments."


Saarinen and his colleague Vesa Hämäläinen are sitting only a few metres from activity on the mockup. But they could as well be separated by millions of kilometres of space or thousands of leagues of ocean depth. "This has been one of the biggest challenges of the operation: working with pure models without any visual connexion," says VTT Executive Vice-President Jouko Suokas. "But it has been an excellent platform to increase our competency in virtual reality and control software. This expertise is now being transferred to industry, which was one of the key reasons for our involvement in this project."


In the "laboratory conditions" provided by DTP2 in Tampere, the operation was a model of perfection. Years before the 54 divertor cassettes will be inserted into the ITER vacuum vessel, work is beginning now so that—in the industrial environment of ITER assembly—the same level of perfection is achieved.

The 1:1 scale cassette mockup has almost reached its destination inside the vacuum vessel. Although the operation is automated, VTT senior technician Vesa Hämäläinen verifies that all is going well.

The narrow tunnel through which the mockup cassette is slowly progressing replicates the dimensions of the lower remote handling ports of the ITER Tokamak.

Jointly operated by VTT Tampere and Tampere University of Technology on behalf of the European Domestic Agency for ITER, Fusion for Energy, the 20-metre-long cassette multifunctional mover forms the core of the divertor test platform DTP2.

"This was the last operation that needed to be demonstrated and also the most challenging," said Mario Merola, ITER Internal Components Division head (second from right). From left to right, the ITER team: Stefan Gicquel, Andrey Fedosov, (Mario), and Marcos Garcia-Martinez.

A joystick for small adjustments

In the DTP2 control room, VTT senior researcher Hannu Saarinen sits, eyes riveted to an array of screens. "More than 80 percent of the operation is pre-programmed," he explains. "We use the joystick only for small adjustments."

The inboard hook, or "nose," of the cassette mockup will soon connect to the vacuum vessel structure where it will lock into position.

The event carried a strong significance for the representatives of the ITER Organization, the European Domestic Agency for ITER and the VTT Technical Research Centre in Tampere who have worked together on DTP2 (hardware, software, human resources). After years of R&D, the time has now come to pass the challenge on to industry.

In the control room

In the DTP2 control room, a few steps away from the 20-metre-long cassette multifunctional mover, specialists from the ITER Organization, Fusion for Energy and VTT closely follow the operation on the virtual reality screen.

For VTT Executive Vice-President Jouko Suokas (centre) the biggest challenge of the operation consisted in "working with pure models without any visual connexion."