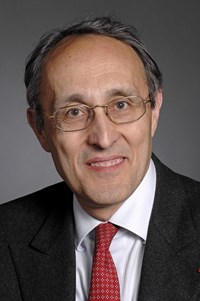 
I receive this appointment by the ITER Council as a great honour and a very serious responsibility. To be offered the possibility of contributing at this level of responsibility to such a project—one that is so promising for the long-term future of mankind—is first and foremost an honour. I would like to express my profound gratitude to all of the eminent fusion scientists and engineers, as well as the visionary political leaders, who have made the ambitious goals of the ITER program reachable during the next years.


At the same time I feel the weight of the task before me: to complete the construction of the complex ITER facility as soon and as efficiently as possible within the largest international cooperation ever gathered, thereby fulfilling the expectations of the seven ITER Members. I am confident that we will succeed if we organize ourselves to manage this construction both as an industrial and as a scientific project, and if we work hard to keep the trust of the political leaders and the public that has been granted us so far.


After seven years of construction (preparatory site work plus building design), ITER is entering a new and decisive phase: we are past the time of "learning" and we are now entering into manufacturing and preparations for assembly. This new phase requires a new organization—one tailored to meet these two major challenges, because what we have to deliver now is both a research and an industrial facility.


I was appointed on the basis of an action plan. I will have many occasions in the coming weeks to elaborate on the new organization I will implement. However, one thing that I can say today is that we will succeed on the condition that the ITER Organization and the Domestic Agencies operate as an integrated team.


What are the concrete aspects of this new organization?


The main change is that the ITER Director-General has now been fully empowered by the ITER Council to make decisions on technical and financial matters for the whole project. From now on, he is the Director-General of ITER as a whole; he is invested with full authority.


In this respect, the creation of an Executive Project Board, with members of both the ITER Central Team and the Domestic Agencies, will be decisive. A significant central fund will also be established to enable the Director-General and the Executive Project Board to implement decisions swiftly and efficiently.


What made you accept the job?


I did not seek the job of Director-General. I was asked to apply and I accepted for two reasons. First, I've always been concerned with energy issues. Energy is the key to mankind's social and economic development. Today, 80 percent of the energy consumed in the world comes from fossil fuels and we all know that this resource will not last forever. With fusion energy we have a potential resource for millions of years. Harnessing it is an opportunity we cannot miss.


I would be desperate if we did not succeed. I am well aware of the difficulties, but these difficulties are more industrial and organizational than technological or scientific. Also, ITER is a project that I know well. As High Representative for the implementation of ITER in France since 2008, I have followed project development closely and participated in the ITER Council meetings from the very start.


ITER is the last chance we have to demonstrate that tokamak fusion is manageable—there will be no other. But in order to succeed, the first decisive step is to change the interaction between the ITER Organization Central Team and the Domestic Agencies.


What—in your "previous life" as a scientist, academic, high-level civil servant, or as the Administrator-General of France's Alternative Energies and Atomic Energy Commission (CEA) for the past six years—has prepared you for the task you are now embracing?


In the reorganization of ITER, I draw upon two significant professional experiences.


As a very young man, some thirty years ago, I was appointed to build a higher education institution in France, the Ecole Normale Supérieure de Lyon. The task was extremely challenging as we had to start from scratch—no institution like it had been established since 1881! Now, ENS-Lyon is rated fourth among all the French higher education institutes in the Shanghai rankings.


The main thing I learned during the process was that having someone firmly in the driving seat, with the power to decide, is the key to success.


During my time spent as Administrator-General of the CEA, the Laser MegaJoule (an inertial fusion facility near Bordeaux) and the Réacteur Jules Horowitz (a research reactor in CEA-Cadarache) were under construction. The scientific, technological and above all industrial challenges of these two projects were very much like those we are encountering now in the building of ITER.


In ITER, the international dimension adds another challenge...


It certainly does, but this challenge is not new to me. Throughout my career, and as early as 1975 when I began teaching and researching in the French university system, there has always been an international dimension to my professional life.


In the early 1980s, I was visiting professor in an American university for a full year. In the late 1980s, I was one of the very first to implement an effective research program with China in catalysis. Later, in the 1990s when I was the Director-General of Research at the French Ministry of Higher Education and Research, interaction with international partners was constant.


And in my 12 years as High Commissioner for Atomic Energy and head of the CEA, we developed closed partnerships with all the countries that also happen to be ITER Members. What I learned throughout my 40-year career is that in an intercultural situation you should never impose your view, but rather do your best to understand cultural differences.


As an official in the research and education ministries in the 1990s and early 2000s, and then as the High Representative for the implementation of ITER in France, you can look back on nearly two decades of involvement in ITER. In the past few months, as you approached ITER more closely to prepare your action plan, has your perception of the project evolved?


I've been involved with ITER for many years, indeed, but my involvement was from the "outside." From that observation point, I was well aware of the difficulties of the project; now I'm beginning to take the full measure of the reasons that are behind these difficulties. Needless to say, I am also fully aware of the great achievements that have been made so far.


In the past few months, as Director-General Osamu Motojima and I prepared the transition, I had extensive talks with people throughout the organization. I must say I was struck by their deep commitment to the project, and I sensed the same commitment in the Domestic Agencies that I have visited since last December.


Do you remember when your first heard the name "ITER"?


Very clearly. I first heard the name ITER in 1996 when I was Director-General of Research and Technology at the French Ministry. I remember Robert Aymar, the director of the ITER Project at that time, coming to my office with stacks of files and the news that the Engineering Design Activities for ITER were complete and that ITER was ready to be built. He wanted to know if France was ready to support the project.


At that time, the machine was about twice as large as today and the Minister said: "That's too large, we can't afford it." That was almost 20 years ago. We've come a long way since ...