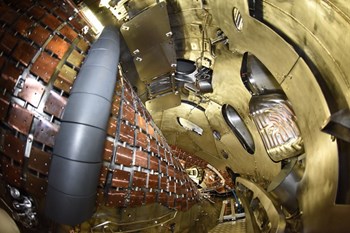 Preparing a fusion device for first plasma is a step-by-step, carefully monitored process. In the last two months at Wendelstein 7-X, superconducting temperatures of 4 K were achieved, the vessel was sealed tight, and evacuation (to create a vacuum) began. In May, the magnets will be tested for the first time under power. Photo: IPP, Torsten Bräuer
Preparations for the operation of the Wendelstein 7-X fusion device in Greifswald, Germany are in full swing. In advance of the decisive magnet cooling stage many preparatory steps have been carried out, including the cleaning and flushing of the numerous helium cooling pipes and the start-up of the cryoplant (which had undergone thorough testing at an earlier date).


On 13 February the gradual cooling of the cryoplant got off to a start. All systems were carefully monitored during the step-by-step process, with particular attention to checking for leaks in the piping or cooling systems.


Four weeks later, on 10 March, the target temperature of 4 K was attained—an essential milestone, as well as a prerequisite, for superconductivity in the magnets. Verifications will still take some time yet; presumably in May the magnets will be tested for the first time under power.


On 12 March the last ports in the plasma vessel were sealed vacuum-tight and evacuation of the vessel could begin. In addition to readying diagnostic equipment and working on switchgear and cabling, the verification of leak-tightness in the numerous connections and seals is proceeding.