Over an intense five days, participants learned about the new features of SOLPS-ITER and how to run the suite and interpret its results.
In a tokamak reactor, the plasma periphery (also called the scrape-off layer or SOL) is the critical buffer region between the hot core and the solid wall elements.


It is the region in which plasma must be cooled sufficiently for technologically feasible wall armour components to be deployed and is the vehicle through which particles escaping the core are exhausted. Without such exhaust, the helium ash produced by the deuterium-tritium fusion reactions would pollute the core plasma and prevent burn sustainment.


Most currently operating devices and all future reactor concepts based on the tokamak—including ITER—use magnetic fields to divert the SOL plasma to the divertor region where the cooling action and particle exhaust can be more readily managed. This also has the effect of reducing the penetration of impurity particles (released from plasma-facing materials into the core), thereby preventing the degradation of plasma purity.


When seeking to understand the behaviour of the SOL, it is important to take into consideration its interaction with materials and the presence of very low plasma temperatures in comparison to the hot core plasma. A complete model thus requires the introduction of surface physics processes and atomic physics in addition to the usual plethora of plasma transport mechanisms. This rich and complex array of phenomena requires the use of specialized computer simulation tools. 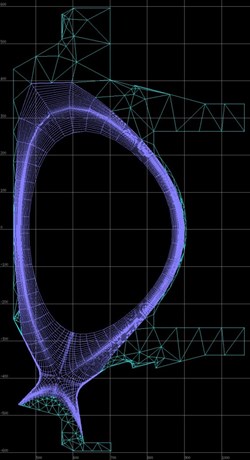 Following a series of tutorial presentations on the first day of workshop, the participants learned how to import SOLPS-ITER from the ITER Organization GIT repository and succeeded in compiling the code on their home institution computers. They were then taken step-by-step through the complex process of building a simulation grid for a real tokamak simulation (in this case an example from the C-Mod device at MIT) which, with its high plasma density and magnetic field, has a divertor plasma most closely resembling today the conditions expected in ITER.
One such tool, used at ITER since the days of the Engineering Design Activities (EDA) in the early 1990s, is the SOLPS (SOL Plasma Simulation) suite, previously known as B2-Eirene. It has been the workhorse for the design of the ITER divertor and was the principal tool with which the ITER fuelling and pumping requirements were established. The code package is still intensively employed to study ITER plasma boundary physics and tokamak performance.


Over the years, SOLPS has been used and developed in parallel by various research groups around the world, most notably at the Max Planck Institute for Plasma Physics IPP Garching (Germany), St. Petersburg State Polytechnical University (Russia), Forschungszentrum Jülich (Germany) and, of course, at ITER.


As early as 2009, it was decided that the ITER Organization should upgrade the code version it used and provide a new, more versatile package for ITER simulations by merging the most recent developments made by the SOLPS community from a physics and a numerical point of view. This new code suite is named SOLPS-ITER and it will be one of the first major components to be incorporated within ITER's Integrated Modelling & Analysis Suite (IMAS), a framework to support the development of sophisticated modelling workflows for ITER.


An important milestone in this effort was reached last week with the official launch of SOLPS-ITER. Users and developers of former SOLPS versions, representing six of the seven ITER Members, converged on the ITER Headquarters for a dedicated code release workshop—the largest such gathering of SOLPS users ever staged.


Over an intense five days, participants learned about the new features of SOLPS-ITER and how to run the suite and interpret its results. They were introduced, through hands-on tutorials given by Simon Pinches and Louwrens Van Dellen of ITER's Confinement and Modelling Section, to the IMAS software management tools, including the GIT distributed revision control system and also saw how modified versions are automatically built and tested on the IMAS Continuous Integration server.  Discussions also took place on future directions for the code, such as new physics phenomena to be added, advanced numerical schemes to implement, and user interfaces and archival/retrieval tools.


Further training sessions are planned at selected ITER Member institutions for those who were unable to attend this launch workshop.  With the upgraded package now launched, the hope is that the code will be used as widely as possible to simulate plasma experiments throughout the ITER community, helping to improve confidence in and further improve this key simulation tool.