Rider in the storm

Share Tweet
Rider in the storm
The safest place to be when lightning strikes a crane is ... in the crane's cabin itself.
And that's precisely where M'hamed Harit was, last Tuesday 9 June at 3:37 p.m., when a monster bolt not only hit crane #2 but also passed through its metal structure like a stitching needle ... three times in a fraction of a second. 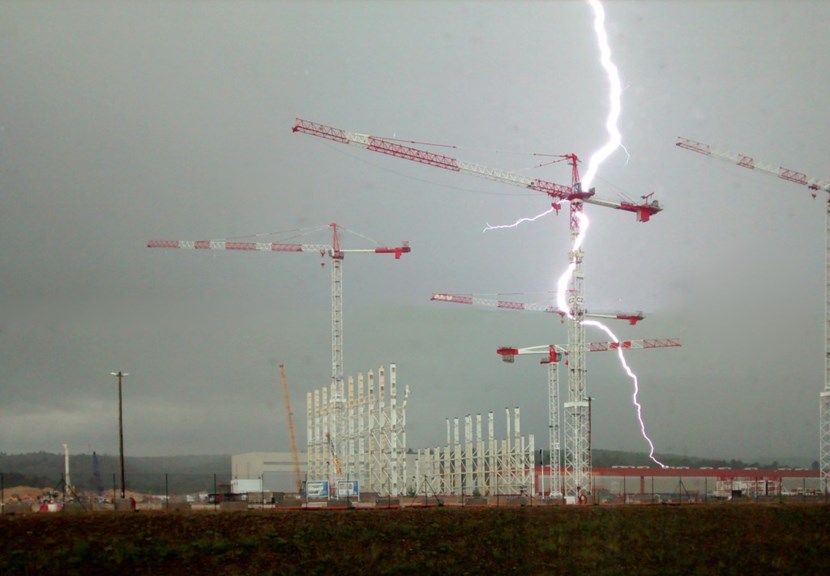 At 3:37 p.m. on Tuesday 9 June, a monster bolt hit crane #2. In his cabin, veteran operator M'hamed Harit said it felt like being ''caught between bombs and a mega fireworks display.'' Graeme Vine, from the ITER vacuum team, took this exceptionally well-timed picture from his third floor office.
Like his colleagues in the other cranes on site, M'hamed Harit, a crane operator for 30 years, was where he was supposed to be. When an "orange alert" is sounded to signal the approach of a storm, the instructions are clear: operators must remain in their cabin, which acts as an insulated Faraday cage protecting them from the electrical discharges of the lightning bolts.


"I've sat in my cabin through many a storm," says M'hamed, "but that one was the worst I ever experienced. The thunderclaps were so loud, the lightning bolts so bright, that I felt like I was caught between bombs and a mega fireworks display." Was he frightened? "Yes, I must say I was. I pulled down the curtains and took refuge in a small, windowless recess at the back of the cabin."


The orange alert had sounded at 2:08 p.m. and was upgraded to red at 2:29 p.m. The storm reached a peak about an hour later, when Graeme Vine, from the ITER vacuum team, took this exceptionally well-timed picture from his third floor office. By 5:24 p.m. the red alert was lifted and crane operators were contacted on their personal cell phones—as most of the equipment (including radios and the lifts) had been knocked out by the electrical storm.


It was past 6:00 p.m. when M'hamed eventually made it to the ground. "I was still a bit apprehensive. It usually takes me 15 minutes to climb down the crane's ladder when I don't take the lift. This time, I think I made it in 5 minutes flat..."


The cranes  were back to functioning normally two days after the storm, thanks to the materials service of the VFR consortium, which was able to intervene rapidly.