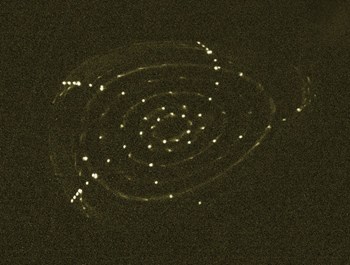 The evidence: the fluorescent rod makes closed, nested magnetic surfaces visible — the magnetic field cage for the plasma is exactly as it should be. Photo: IPP, Matthias Otte
Testing of the magnetic field in the Wendelstein 7-X fusion device has been completed sooner than planned. This fusion device of the stellarator variety located at the Max Planck Institute for Plasma Physics (IPP) in Greifswald, Germany is now in its commissioning phase in anticipation of a first plasma before the end of the year.


The measurements, completed in early July, show that the superconducting magnetic coils are producing the required magnetic field. The magnetic cage for the fusion plasma, which has a temperature of many million degrees, has a configuration that is in line with physicist calculations. This is an essential milestone in the operational preparations that are currently underway.


Although Wendelstein 7-X is not yet in operation, the experiment is already providing the first scientific results. The magnetic field meets the precise requirements for the confinement of the high-temperature fusion plasma as demonstrated by the first measurements of the field structure. "We've got nice closed flux surfaces," Thomas Sunn Pedersen, the IPP Division Head responsible for this task, was pleased to announce.


How do you build a magnetic cage for the plasma? Fusion researchers make use of the fact that the charged plasma particles — ions and electrons — are kept on narrow spiral tracks around magnetic field lines by electromagnetic forces. As a result of a suitably formed field, the fast particles, as if guided on tracks, are kept away from the walls of the plasma vessel. To achieve a closed cage, the field lines in the centre of the circular plasma vessel must span closed, nested, circular surfaces like the growth rings inside a tree trunk. This prevents field lines pointing outwards, which would direct the plasma particles against the walls and make it impossible to achieve the high plasma temperatures required. 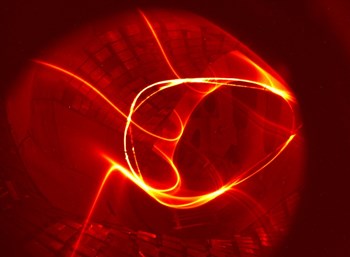 Flux surface diagnostics: the photograph combines the tracer of an electron beam on its multiple circulation along a field line through the plasma vessel with the image points left behind by a fluorescent rod which has been moved through the image plane. The rod is moved quickly and is not visible due to the lengthy exposure time. Photo: IPP, Matthias Otte
"Once the flux surface diagnostics were placed in operation, we were immediately able to see the first magnetic surfaces," reports Matthias Otte, who is responsible for the measurement process. "Our images clearly show how magnetic field lines create closed surfaces in many toroidal circulations." The flux surface diagnostics enables the structure of the field to be precisely measured. For this purpose, a thin electron beam is injected and moves along a field line in circular tracks through the evacuated plasma vessel. It leaves behind a tracer, which is created by collision of the electrons with residual gas in the vessel. If, in addition, a fluorescent rod is moved through the vessel cross section, light spots are created when the electron beam hits the rod. In the camera recording, the entire cross section of the magnetic field gradually becomes visible.


During a single measurement that lasts around 60 seconds, the electron beam circulates many times on "its" field line in the circular plasma vessel and thereby covers a distance of several kilometres... "Following the lengthy assembly time, we are now very pleased with the excellent measurement results," says Sunn Pedersen: "The flux surfaces look just how we wanted them to appear."