Steven Cowley: ITER is going to be a historic experiment 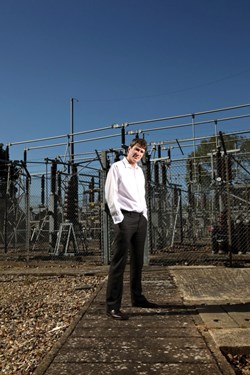 For Steven Cowley, ITER is the experiment that will provide the demonstration that fusion is the next global energy source.
"There are moments in history where people present in a certain room ... a certain place ... are conscious of living a moment of great transition. Let me tell you, ITER will be one of those."


Steven Cowley*, one of the world's leading experts and fusion science, is convinced that fusion is the perfect way to make energy. With the near unlimited availability of raw materials (sea-based stores of deuterium and lithium could cover fusion needs for 60 billion and 30 million years, respectively) and the potential to produce huge amounts of carbon-free energy with almost no environmental impact, fusion is too good not to pursue.


"Once we figure out how to do it in a commercially viable way," he says, "fusion will dominate world energy production."


The difficulty, of course, is that fusion is incredibly hard to do. Although scientists have been able achieve deuterium-tritium in the laboratory—including Cowley's laboratory in the UK at Culham—they have not yet been able to sustain it. "That's where ITER comes in," Cowley told the 300 participants to the "Fusing the Project World" project management conference held at the ITER Organization on 4 September.


"We'll have achieved the ITER Baseline once we've been able to produce 500 MW of fusion energy at a flat-top burn of 400 seconds," he stressed to the audience. "But our best models predict that at that level, beyond 400 seconds, we may be able to turn off external heating because the plasma is sustained by the reaction itself. If that is achieved it would be the world's first ignited plasma and the demonstration that fusion is the next global energy source."


Reaching that historic milestone in what he describes as "one of the most amazing pieces of technology built in the 21st century" is a critical step on the road to achieving fusion energy. Following that, a lot of engineering will still be necessary to get the reactor to a stage where it is commercially viable. "ITER is an experiment, not a power station," he stressed. "We need to find out exactly how things behave when you take them to a certain level."
"When ITER achieves the first self-sustained fusion burn I hope to be sitting in the control room. A little older—in fact, perhaps a lot older—but for me as a scientist, it will probably be the crowning moment of my lifetime."


* Steven Cowley is Chief Executive Officer of the United Kingdom Atomic Energy Authority and Head of EURATOM/CCFE Fusion Association, which hosts the JET and MAST tokamaks.