Michael Roberts: "We had a common objective to make fusion a reality"

Share Tweet
Michael Roberts: "We had a common objective to make fusion a reality"
Michael Roberts has a more than 40-year history with the United States fusion program, including over 26 years as Director, ITER and International Division, within the Fusion Energy Sciences (Office of Science) in the US Department of Energy (DOE). Since his retirement from the DOE in 2006, Roberts has continued to serve the US and international fusion community as Chair of the ITER Council Working Group on Export Control, Non-Proliferation and Peaceful Uses. 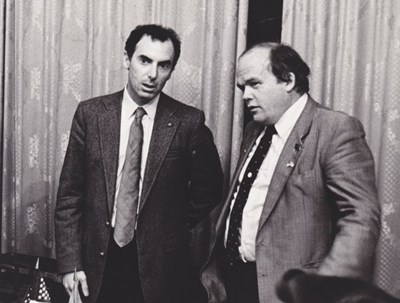 Mike Roberts, left, with Evgeny Velikhov during a meeting of the US-USSR Joint Fusion Power Coordinating Committee (JFPCC) 19-20 September 1985 at the Kurchatov Institute in Moscow. Photo: Kurchatov Institute
Could you situate the Geneva Summit in international fusion history?


It's important to remember that 1985 was not the beginning of international fusion cooperation by any means. There had been literally decades of person-to-person, program-to-program and high-level exchanges before then. The US international collaboration on fusion research dates back to the early 1950s when Professor Lyman Spitzer at Princeton was intrigued by Juan Peron's announcement that Argentina had achieved fusion in the laboratory and, later, when nuclear fusion was declassified in 1958. Heads of State have been key to major advancements in fusion collaborations. In 1973, we started to interact at more of a program-to-program level. By the time of the 1985 Geneva Summit, I had been involved in international fusion for 19 years.


Tell us about your working relationship with Russian Academician Evgeny Velikhov.


Working with Evgeny was always straightforward, as we had the same objective of advancing fusion energy research through effective international collaboration. While Evgeny and I were involved with fusion collaborations from the beginning, we were always on very different levels and we were many rungs apart on the ladder! At that time, Evgeny, who was always a fusion policy leader, was the science advisor to his nation's leader, while I was a division director in the US fusion program.  Even so, we were the two leaders heading the US-Soviet fusion delegations in 1985. I think you can see the respectful relationship in the photo—he was very senior, I was very junior, but we always worked together well. We had a common objective to make fusion a reality. I worked on a specific science program level, while he did it at very high levels on many projects. For perspective, two weeks after our meetings in 1985, he was at a meeting with President Mitterrand and General Secretary Gorbachev! (See the interview with Academician Velikhov in this issue.)


What factors helped the US and Russia move toward a common project?


The Soviets were open about what they were doing, and we became open too. Government policy helped this happen. Annual bilateral committee meetings at program level for the US-USSR Joint Fusion Power Coordinating Committee allowed us to work together, providing opportunities for me and others from the US fusion program to get to know our Soviet counterparts. I was in the role a long time and people knew who I was and that they could trust me. Leading up to the Geneva Summit, there had been considerable effort in the West to craft a common fusion program "roadmap." This was done under the auspices of the 1982 Versailles Summit process through its Fusion Working Group. The ground was very fertile in 1984 and 1985 to work together, which manifested itself in a US proposal by the end of 1986 to have a quadripartite effort with the US, USSR, EU and Japan. This effort materialized into a Conceptual Design period for ITER from 1988 to 1990. Based on many years of working together bilaterally, the view from my Soviet colleague was typically that "if it is okay with you, it is okay with me." I was known as an honest broker. We had the same international interests, but we also had to uphold our own national interests.


After the Geneva Summit, I was told that President Reagan wanted this to happen because he saw the potential positive impact of American and Soviet engineers living and working together for some period of time. That is a good reminder that ITER is a dual experiment—it's not just science and physics, but also an experiment in international collaboration!


Could you describe how the negotiation was prepared by advisors on both sides? 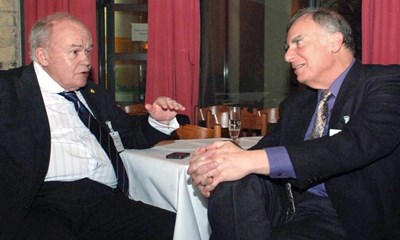 A quarter century later, later, Evgeny Velikhov as ITER Council chair and Mike Roberts as head of the ITER Export Control Group continue their discussion at the Château of Cadarache.
The negotiation leading up to the Geneva Summit was completed in secret. I was in a conversation in Moscow in late September 1985 where Evgeny talked to me about the idea. "Great!," I said. "But I can't make it happen on the US side." To his great credit, Evgeny realized that he had to pursue another way with Gorbachev. A little later, presumably after the Soviet side had given notice to the US side that this idea would be raised at the Summit, Alvin Trivelpiece, Director of the Office of Energy Research, and Secretary of State George Schultz worked in secret to prepare the US delegation to respond to Gorbachev's idea. It was news to us when Reagan said the words about working together in fusion in his television address to the nation right after the conclusion of the Geneva Summit!


Looking back, what do you see as some of your most important contributions to ITER?


I think ITER required the grease of people like me to make its complex mechanism go. People above don't have the time; people below don't have the freedom. There was a layer of people around the world: the Contact Persons for international fusion collaboration. We could work toward consensus or raise issues to higher levels. Everyone in the system knew me and they knew that I acted straightforwardly. We always understood that we could agree on the essence of what needed to be done. It's really personal—governments don't do these things, people do them. It's been a privilege to know all of these people and to be there when it happened.


What do you think other international science collaborations can learn from ITER?


I hope future project developers don't get scared off by the difficulties, but are intrigued by how to do it better. The cost for collaborative scientific projects continues to rise. We have to find a way to go beyond frustration and figure out how to work together. I'd like people to understand how much works about this project. ITER came out of an investment in one-to-one, face-to-face, person-to-person interactions. This developed trust and understanding that allowed us to pursue this collaboration.


There was a great deal of effort put into finding ways to accommodate every party's point of view on critical topics such as intellectual property rights, staff regulations, dispute resolution mechanisms, export control, and management audits. My recent experience with the ITER Council Working Group on Export Control, Non-Proliferation and Peaceful Uses offers another example of what works. All these topics, in fact nearly all the Articles in the ITER Agreement, deal principally with the practical aspects of collaboration at government level and not with the technical aspects of fusion, so these hard-won understandings among these major world parties could well be used for future projects in many fields of endeavor. We don't need to conclude "it's too complex." No one has to start from scratch again.


Michael Roberts began his career in fusion in 1966 at Oak Ridge National Laboratory after completing his Ph.D. in electrical (plasma) engineering at Cornell University. In 1979, he joined the DOE Fusion Energy Sciences and took on an international role representing the US at a staff level in international fusion collaborations. In 1994, President George H. W. Bush awarded Roberts a Meritorious Executive medal for his work in enabling the start of the ITER Engineering Design Activities. Throughout the formative years of ITER project development, Roberts was the US Contact Person for ITER and the lead US staff person for the many bilateral and multilateral collaborative fusion activities that underpinned the ITER activities. In 2007, President George W. Bush awarded Roberts a second Meritorious Executive medal for his work in enabling the successful conclusion of the negotiations for the ITER Agreement.