Share Tweet
Council will review ITER proposals on schedule
Exactly 30 years after the November 1985 Geneva Summit gave government-level impetus to the world's largest collaborative effort in fusion science, the governing body of the ITER Organization—the ITER Council—convened for the seventeenth time. The meeting on 18 and 19 November brought representatives from China, the European Union, India, Japan, Korea, Russia and the United States to the site of the ITER Project in Saint-Paul-lez-Durance, France, where construction activities on the scientific facility have accelerated in recent months. 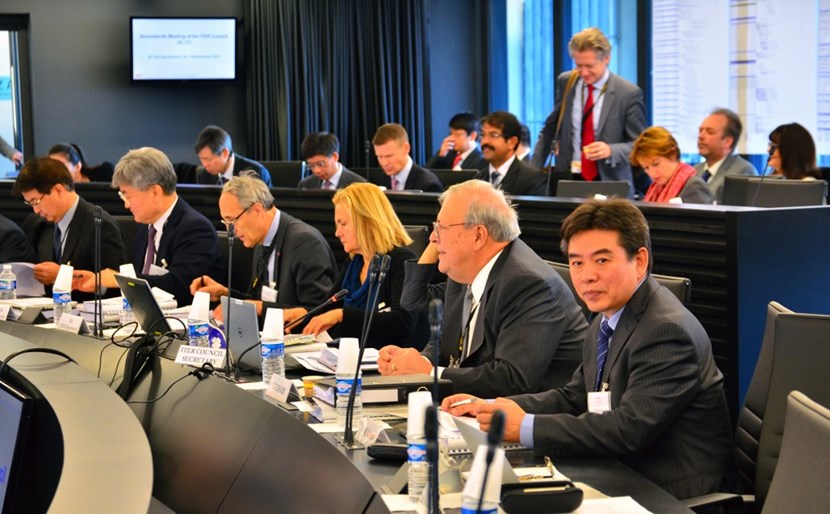 During the Council meeting on 18-19 November, ITER Organization Director-General Bernard Bigot presented an updated long-term project schedule. The Council is deliberating on the proposal and the details will only become available in June 2016 once all parties agree.
Discussion over the two days focused, as planned, on the ITER project schedule. Since his arrival at the head of the ITER Organization in March 2015, Director-General Bernard Bigot had promised to present the Council with an updated project plan, one that integrated accumulated delays with the scope, cost and schedule for the project going forward.


This effort was successfully accomplished in eight months through the coordinated efforts of the ITER Central Team, based in France, and the seven Domestic Agencies. The exercise itself was an example of the close collaboration that the Director-General has tried to instill as part of a new, success-oriented "project culture."


"We were able to keep our commitment to the Council at the needed level of quality and in the limited amount of time we set for ourselves," stated Director-General Bernard Bigot in his opening remarks. "To do so required the integrated scientific insight, engineering skills, and managerial competencies of every part of the organization. As a team, we performed a bottom-up assessment of the project. As a team, we found solutions to design challenges. As a team, we conducted an exhaustive and comprehensive Integrated Review. We have taken the first essential steps toward establishing a much-needed project culture." 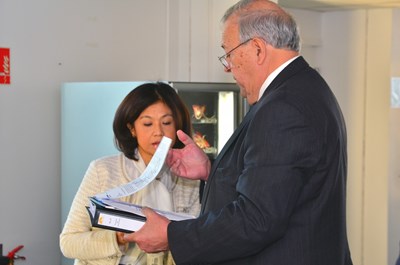 The Council was the last meeting for Chair Robert Iotti, from the US (here with Council Secretary Sachiko Ishizaka). He will be succeeded by Won Namkung, from Korea.
As a result, there is now a much-improved understanding of the scope, sequencing, risks, and costs of the ITER Project, acknowledged the Council, which commended the ITER Organization and the Domestic Agencies for their intensive efforts.
The updated long-term schedule, and associated budget and staffing resources, will now be the object of an independent review mandated by the Council.

Until the Council completes its analysis, no definitive project schedule can be announced. "Of course we could not expect immediate approval of our proposals related to schedule, budget, and staffing," stressed the Director-General to the press after the meeting. "A fully qualified panel of experts will now look at the proposed schedule to verify the consistency and reliability, and also to see if there are areas that can be improved or accelerated. ITER is a funded through public investment and this level of scrutiny is absolutely to be expected."

In order to keep up project momentum while discussions are underway on the long-term schedule, the Council approved a schedule and milestones covering 2016 and 2017. The Council also approved a re-allocation of existing resources to meet these milestones, and the hiring of nearly 150 additional staff.


Project progress will be controlled and reported for the coming two years on the basis of 29 "high-level" milestones. Whether related to construction (i.e., the award of the Construction Management-as-Agent (CMa) contract in 2016 or the beginning of work on the B1 basement level of the Tokamak Complex), manufacturing (i.e., the winding of the first central solenoid module) or transport (i.e., the delivery of piping to the ITER site), the milestones are underpinned in the updated schedule by the many thousands of activities that make up progress to First Plasma.


"Milestones are a way of managing a project that is a large and as complex as ITER," says the Director-General. "Below the highest-level milestones are many different strata—approximately 250 milestones in the Level 1 schedule, 1,200 in the Level 2 schedule, and more than 150,000 sequences in the Level 3 schedule—each one a precisely defined task with an assigned owner. ITER is an industrial project now. My commitment to the Council is that the ITER Organization and the Domestic Agencies must never be the limiting step for suppliers to deliver. Instead, we will be catalysts for progress." 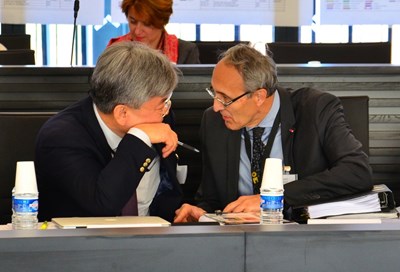 ''We will be catalysts for progress,'' said ITER Director-General Bernard Bigot (right), seen here in conversation with Deputy Director-General and Chief Operating Officer Gyung-Su Lee.
The Council plans to complete its review of the updated, resource-loaded long-term schedule and reach agreement on the overall schedule through First Plasma by its next meeting in June 2016.


The seventeenth ITER Council was the last meeting for Chair Robert Iotti, from the US, who reaches the end of his two-year term on 31 December. All Council members expressed appreciation for his enormous personal engagement as Council Chair, as well as a long history of involvement with the project that dates back to the early engineering phase for ITER. "Bob became Council Chair at a challenging time—right after the Management Assessment in 2013 that had urged changes in both project management and governance—and he has worked tirelessly to see the recommendations implemented. He deserves great applause," said ITER Director-General Bernard Bigot after the meeting.


The Council elected Won Namkung, from Korea, as the next Chair of the ITER Council and Arun Srivastava, from India, as the next Vice-Chair.

Photos from the seventeenth ITER Council (IC-17) can be viewed here.

Download the press release in English or in French.