Paris, here we come! A blog from COP21 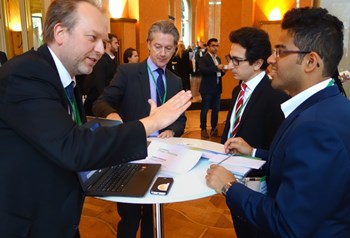 While world leaders had convened in Le Bourget to search for a common answer in the fight against ‪‎climate change‬, the ITER Organization, represented by the Head of Communication Laban Coblentz and Science Engineering Officer Akko Maas, followed the invitation of the ‪‎International New York Times‬ to the very centre of the French capital, to the historic ‪Hotel Potocki‬, to participate in a conference taking stock of ''‪‎Energy for Tomorrow‬.''
Sunday, 20:00, Paris, le Périphérique: The ring road, the aorta of the French capital, is "saturated," the traffic signs say. After the weekend, the Parisians are slowly rolling home. The Eiffel Tower with its bright Christmas illumination is visible from afar, welcoming the visitor. Bienvenue à Paris! This is where the world is zooming in these days, where nothing less than the future of our planet is being decided. The 21st Conference of the Parties—in short COP21—the largest climate conference ever. And ITER is participating!
Monday, 6:00, Le Bourget, the COP21 site: Queuing in line with the truckers at porte K bis, the delivery entrance of the conference, waiting for permission to enter. There are armed police everywhere. On foot, on wheels, on horses. It is pitch dark and a cold wind is blowing. Only the huge tents that have been erected for security checks are flooded with light. The papers are finally signed, the passport scanned, the car and all it carries checked, first by dogs and then by a huge X-ray machine that passes over the entire car.


Clearance, go! But where? The plywood city built up for the COP21 next to the airport in Le Bourget still lies in darkness. Only a few guards and cleaning personnel are around at this time of day. On my left lies the airstrip with an impressive number of parked Lear jets, on my right a real-size Ariane rocket reaches into the early morning sky. Then the Air and Space Museum comes into sight. It is here where the COP21 hosts one of its side events, La Galerie. It is here where we will raise the ITER flag.
We brought the model of the ITER machine and although our stand is small in terms of square metres, we are determined to compete with tidal wave power, the solar and wind world, food produced by micro-organisms—yes, the food chain plays an essential part in the climate equation—or a sustainable Morocco. And the visitors love us. By the end of the second day Krista Dulon from the ITER Communication team has answered all the questions possible and handed out all the swag we brought with us. Also, the pile of brochures is melting fast.
Tuesday, 8:30, Paris, Hotel Potocki: It is part of our mission to also participate in the conference "Energy for Tomorrow," hosted by the International New York Times (see also here). We were far too late to sign in for this event and to join the impressive line-up of speakers on stage such as US Head of State John Kerry, the CEOs of Unilever, Ikea, Patagonia, RWE, ABB, Ericsson, or the Kellogg Company. However, ITER Head of Communication Laban Coblentz and Science Engineering Officer Akko Maas chair a session called "Ask the Expert" and they are doing well. By the end of the day many more people, influential people, know what ITER stands for. We made new friends. Mission accomplished. 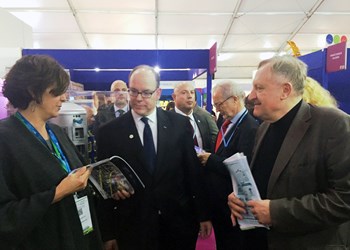 On the last day of the exhibition a well-known visitor stopped by the ITER stand: His Serene Highness, Prince Albert II of Monaco.
Wednesday, 22:00, Le Bourget: Again in line with the truckers. Time to dismantle the stand. For the exhibitors promoting alternatives to the carbon energy era the COP21 is over. It is now up to the state leaders and their negotiators to get back to the negotiating table and to come to a conclusion on how to stop our planet from heating up. And they will. By Saturday the news will have spread.


"The future of energy is being reshaped as we speak," Fatih Birol, the Executive Director of the International Energy Agency, had said one day earlier at the "Energy for Tomorrow" conference. John Kerry left no doubt as well that things are about to change. The transformation will be "business driven," he had stated. "If the right signals come out of the Parties, the low carbon market will explode." And so it may be. And we, ITER, will be back!