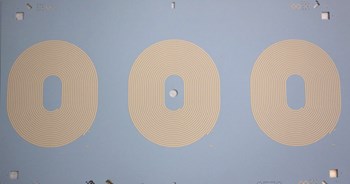 One of the LTCC sensor prototypes manufactured for the European Domestic Agency by Via Electronic.
The European Domestic Agency is collaborating with German supplier Via Electronic on sensors for measuring magnetic field. Installed in the heart of the ITER machine, more than 200 of these instruments will be relied on to provide vital information in the control of the ITER plasma.


Via Electronic is producing a series of 40 prototypes, working closely with the European agency to optimize design parameters. Each prototype consists of 34 ceramic layers, 30 of which contain a screen-printed spiral coil circuit made out of pure silver. The individual spirals, which have a width of 400 µm and a height of 12 µm, are connected together with inter-layer "vias," so that the whole assembly forms a single pick-up coil. Low-temperature co-fired ceramic manufacturing (LTCC) produces a very robust product that is fully encapsulated in ceramic.


"It's important for these sensors to be particularly robust as they will be located in a very harsh environment close to the plasma, with extremely limited access once ITER operation begins," says Shakeib Arshad, Europe's technical officer for this equipment. "Although this type of technology has been used extensively in other applications, for example in medical equipment, it is unconventional in fusion because simpler technology was adequate in the smaller tokamaks built up until now."


Following the fabrication of a first batch of prototypes in 2014, several refinements were made to the original design. Eight variants are being produced with different wiring schemes and electrical screen thicknesses.


The European Domestic Agency is also preparing two additional contracts for the fabrication of similar prototypes by other suppliers. "As the next step, these prototypes will be irradiation tested in a fission reactor, in order to establish their performance in an ITER-like environment," says Sandra Julià Torres, Europe's officer for the prototyping contracts. "Irradiation testing is costly and the results can depend on subtle manufacturing details. Prototypes from several manufacturers are desirable for this reason."


Irradiation testing will be carried out by NRG in The Netherlands and CVR in the Czech Republic. Additionally, a computer model is being developed by the Belgian Nuclear Research Centre SCK-CEN in order to help with interpretation of the irradiation tests.


Read the original article on the European Domestic Agency website.