An award for India's PK Kaw 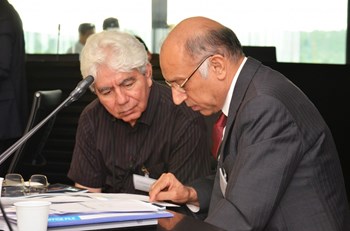 
After obtaining a PhD at age 18 from the Indian Institute of Technology, Delhi, Professor Kaw spent time as a researcher at the Physical Research Laboratory in Ahmedabad, India, and the Princeton Plasma Physics Laboratory, New Jersey, US. In 1982 he returned to India to spearhead the establishment of a national magnetic fusion program, founding the Institute for Plasma Research and playing a leading role in gaining international recognition for the national program. Named Year of Science Chair by the Indian Department of Science & Technology, he continues to be active in research and in the mentoring and training of the younger generation of plasma physicists in India.


Professor Kaw was the first Chair of the ITER Council Science and Technology Advisory Committee and led the committee's deliberations from 2007 to 2009.


"Those of us within the ITER community who have worked with Professor Kaw over many years in the pursuit of fusion energy have appreciated not only his deep insight into plasma physics issues, but also his tireless enthusiasm for the achievement of our common goal," said ITER Director-General Bernard Bigot. "Over a long and productive career he has greatly enriched our understanding of physics processes in very different types of plasma with important implications for applications in many areas of modern plasma research."


Professor Kaw is the second laureate of the Subrahmanyan Chandrasekhar Prize, which was founded by AAPPS (Department of Plasma Physics) in 2014 to recognize outstanding contributions to experimental and/or theoretical research in fundamental plasma physics and plasma applications in all fields of physics. The prize is sponsored by the Future Energy Research Association.


Subrahmanyan Chandrasekhar was an Indian astrophysicist (1910-1995) who received a Nobel Prize in Physics for his work on the structure and evolution of stars, work which was seminal in the development of the theory of black holes. The Association of Asia Pacific Physical Societies (AAPPS) is an umbrella organization for physical societies and institutes in the Asia Pacific region devoted to the joint promotion of research, teaching and regional collaboration in physics.