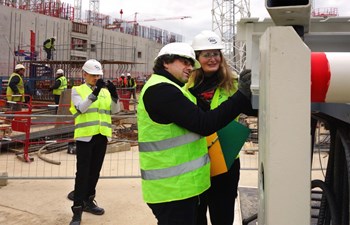 Experts from the French Nuclear Safety Authority, accompanied by technical specialists from the Institute for Radioprotection and Nuclear Safety, have carried out 15 on-site inspections since 2011 (here on 3 December 2015). On 5 January 2016, ITER Director-General Bernard Bigot and the head of the Nuclear Safety & Environmental Protection Division, Joelle Elbez-Uzan, presented an overview of the ITER installation's status to the ASN Board of Commissioners.
The French Nuclear Safety Authority (Autorité de Sûreté Nucléaire, ASN) regularly asks the nuclear operators in France to present an overview of the status of their installation in terms of nuclear safety and radiation protection.  This consultation is requested and carried out by an independent board of commissioners (le Collège).


In this context, ITER Director-General Bernard Bigot and the head of the Nuclear Safety & Environmental Protection Division, Joelle Elbez-Uzan, met with the ASN Collège on 6 January 2016. They reported on the changes in project organization since the arrival of the new Director-General, the progress of the ITER construction site, and major future milestones.


The ASN acknowledged the efforts of ITER Organization to improve the monitoring of external contractors and to establish a safety culture since the previous interview of ITER management in July 2014. The ASN will continue to pay particular attention to these topics in the months to come.


Progress of R&D work with respect to safety was also noted, as well as actions that remain to be completed, in particular on detritiation. On the subject of radioactive waste, the ITER Organization is studying several options for radwaste optimization, interim storage, and cooling either in the facility or off-site; the Organization plans to submit the selected options to the ASN at the end of 2016. The ASN Collège has requested that technical discussions on these subjects be organized in 2016.


The ASN took note of project delays—some of several years—which so far have not impacted the safety of the facility. The ASN has asked the ITER Organization to commit to a new detailed schedule for reporting, in line with the revised project schedule.