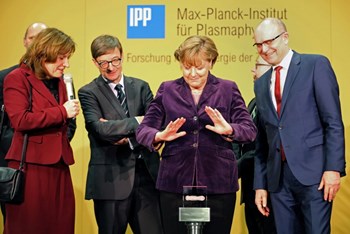 German Chancellor Angela Merkel prepares to initiate the first hydrogen plasma at Wendelstein 7-X on 3 February 2016. The Chancellor is pictured with IPP Scientific Director Sibylle Günter; president of the Helmholtz Society Otmar Wiestler; and Erwin Sellering, Minister-President of Mecklenburg-Vorpommern. Photo credit: AFP
The Wendelstein 7-X fusion device at the Max Planck Institute for Plasma Physics (IPP) in Greifswald, Germany produced its first hydrogen plasma on 3 February 2016, marking the start of scientific operation. As the world's largest stellarator, Wendelstein 7-X will investigate the suitability of this type of fusion device for the design of a fusion power plant.


Since the start of operation on 10 December 2015, Wendelstein 7-X has produced more than 300 discharges with helium. These served primarily to clean the plasma vessel, and as cleanliness increased, plasma temperature increased ... finally attaining six million degrees Celsius. Plasma heating and data recording were also tested during this period and the first measuring instruments for investigating the plasma were put into operation (X-ray spectrometers, interferometers, laser scattering and video diagnostics).


The first hydrogen plasma, which was switched on by German Chancellor Angela Merkel at a ceremony on 3 February 2016, marks the start of scientific operation. A 2 MW pulse of microwave heating transformed a tiny quantity of hydrogen gas into an extremely hot (80 million degrees Celsius) low-density hydrogen plasma for a quarter of a second.


The present initial experimentation phase will last until mid-March. The plasma vessel will then be opened in order to install carbon tiles for the protection of the vessel walls and the divertor. "These facilities will enable us to attain higher heating powers, higher temperatures, and longer discharges lasting up to ten seconds," explained Thomas Klinger project head for Wendelstein 7-X. Successive extensions are planned until, in about four years, discharges lasting 30 minutes can be produced with full heating power of 20 MW.


Wendelstein 7-X, the world's largest stellarator-type fusion device, will not produce energy. The goal is to put the quality of the plasma confinement on a par with that of a tokamak for the very first time. And with discharges lasting 30 minutes, the stellarator should demonstrate its fundamental advantage—the ability to operate continuously. In contrast, tokamaks can only operate in pulses without auxiliary equipment.


The assembly of Wendelstein 7-X began in April 2005. Investment costs of approximately EUR 370 million are being met by the federal and state governments, and also by the European Union. The components were manufactured by companies throughout Europe and numerous research facilities at home and abroad were involved in the construction of the device. Within the framework of the Helmholtz Association of German Research Centres, the Karlsruhe Institute of Technology was responsible for the microwave plasma heating; the Jülich Research Centre built measuring instruments and produced the elaborate connections for the superconducting magnetic coils; installation was carried out by specialists from the Polish Academy of Science in Krakow; and American fusion research institutes at Princeton, Oak Ridge and Los Alamos contributed equipment including auxiliary coils and measuring instruments.


Read the full press release in English and in German.

Learn more about Wendelstein 7-X and the stellarator type of fusion device on the IPP website.