Share Tweet
High stakes: Mr. Bigot goes to Washington
With a crucial report from the US Secretary of Energy due shortly to the US Congress, an important US Congressional oversight body asked the ITER Director-General to visit Washington, D.C. for a public discussion on ITER's progress. 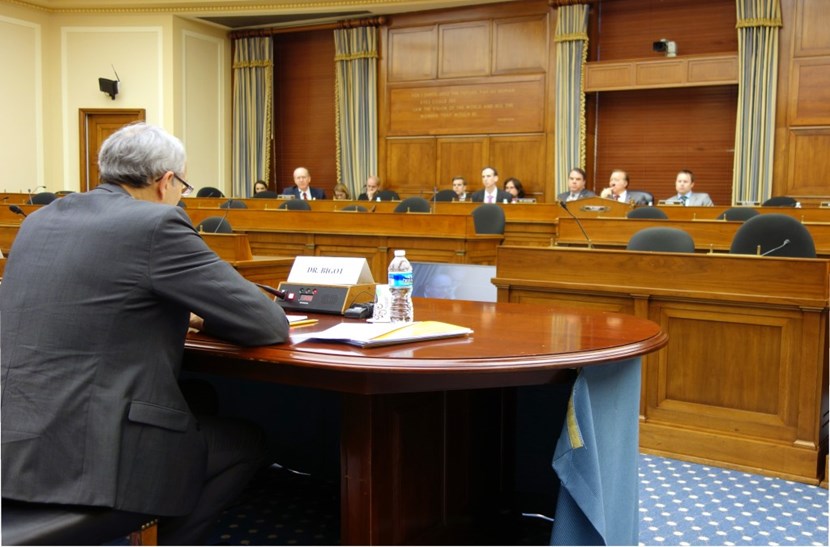 A quote from British poet Tennyson—quite appropriate for a hearing on fusion energy—was engraved in the wood panel facing DG Bigot. It read: ''For I have dipped into the future far as human eyes could see, saw the vision of the world and all the wonder that would be.''
The formal invitation came from The Committee on Science, Space, and Technology Subcommittee on Energy of the US House of Representatives—and specifically from the head of the subcommittee, Chairman Randy Weber (Republican-Texas). The focus of the meeting was "an overview of fusion energy science."


In addition to Director-General Bigot, two US fusion experts were asked to testify: Stewart Prager, Director of the Princeton Plasma Physics Laboratory; and Scott Hsu, a scientist from the physics division of Los Alamos National Laboratory.


The hearing was not only about the ITER Project. Other fusion projects, mostly US based, also figured into the questions. But it seemed no coincidence that the hearing occurred only five days after the completion of the ITER Council Review Group report: a probing dissection of the health of ITER reform efforts.


On another timely note: just one week from today, on Monday, 2 May, US Secretary of Energy Ernie J. Moniz is required by US law to deliver to the Congress his own assessment of ITER's progress, with a thumbs-up or thumbs-down on whether the US should remain an ITER Member.


That pending decision formed a dramatic backdrop to the subcommittee hearing. In many ways it was positive. Chairman Weber referred to Bigot's performance to date as "stellar and inspiring." He put a welcome spin on the international nature of the project: "We must consider the importance of access to the ITER reactor for American researchers and America's standing and credibility as a global scientific collaborator. If the US is going to lead the world in cutting edge science, we cannot take our commitments to our international partners lightly and we cannot undermine progress on complex projects."


Most of the members of Congress who spoke were similarly complimentary about ITER's recent progress. Representative Hultgren (Republican- Illinois) made one such remark: "... from all that I have heard, the ITER Project seems to be in a much better place than it has been in the past." For the ITER staff listening to the live stream, having experienced the rigours of the past year, it was "music to the ears" to hear this type of recognition from governmental leaders.


Not all questions had easy answers. Some committee members questioned the long-term nature of the ITER Project, seeking a shorter-term solution. Others asked detailed questions that exposed the confusing cost elements and complex organizational structure of the project.


In one interesting exchange, Representative Loudermilk (Republican-Georgia) asked Director-General Bigot whether, given the chance to start over, he would advocate the same multinational project structure. Dr. Bigot's answer showed a deft diplomatic touch: it would have been better, he said, if the elements of the recent Action Plan had been implemented at the beginning of the project.


Perhaps the best context was set by Stewart Prager, another witness, when he declared, without hesitation, that ITER will be "a landmark experiment in science and energy of the 21st century ... the focus of the world fusion energy program, complemented by strong domestic research in each participating nation."


For the link to the full hearing, see the Subcommittee website.


Click here for the full text of Director-General Bigot's written testimony to the Committee.


Click here for the full text of Director of the Princeton Plasma Physics Laboratory Stewart Prager's written testimony to the Committee.