A tokamak must breathe

Share Tweet
A tokamak must breathe
When plasmas ten times hotter than the core of the Sun begin pulsating inside the ITER vacuum vessel, the combined mass of the Tokamak and cryostat (25,000 tonnes) will need a bit of breathing space. Not much—but enough to accommodate the wobbling, expansions and occasional displacements caused by the tremendous forces at work in the machine. 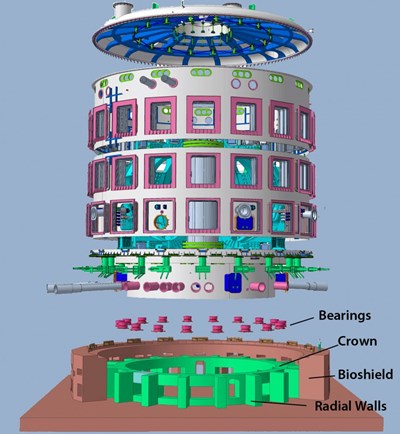 Anchored into the ''crown,'' the circular arrangement of 18 spherical bearings will allow for the smooth transfer of horizontal and rotational forces, giving the ITER Tokamak the indispensable ''room to breathe.''
In order to protect the installation and guarantee its safety, the Tokamak support system will need to be both extremely robust, with a strong connection to the Tokamak Complex basemat, and yet allow for a slight freedom of movement for the cryostat.


Connection and stability will be achieved by way of a massive pedestal—a concrete "crown," connected to walls that are radially anchored to the three-metre-thick bioshield. Eighteen radial walls will act as the flying buttresses of a medieval cathedral, providing an efficient and elegant solution for the even distribution of loads and efforts.


Movement will be permitted thanks to a circular arrangement of 18 spherical bearings that act like ball-and-socket joints and allow for the smooth transfer of horizontal and rotational forces, whether stemming from normal operations, a vertical displacement event or an earthquake.


Such a combination of strong support structure and sliding or spherical bearings is commonly used in large bridges. 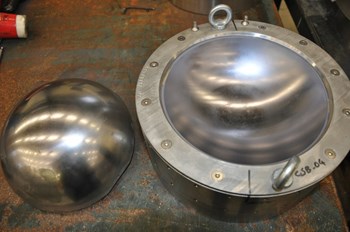 
"In the ordinary world, the bearings would be coated in Teflon, the well-known polymer used in non-stick cookware", explains Robert Fielder, technical responsible officer for the system. "Teflon is very efficient in reducing friction between bearing and socket but unfortunately would not survive in the punishing environment of the Tokamak, where radiation at the base of the cryostat would soon cause it to lose its properties."


For the industrial contractor in charge of manufacturing the bearings (Nuvia, the company that also designed and installed the anti-seismic system of the Tokamak Complex), the challenge was to identify a material that could substitute for Teflon and offer a similar, or even better, low-friction coefficient. 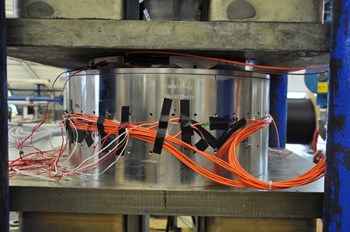 The 1/2 scale prototype in the Nuvia test rig, equipped with thermal probes and optic and electric strain gauges.
It took about six months of research and the testing of dozens of alloys, ceramics and compounds before settling on a copper-aluminium alloy that—combined with a micro lubricant (molybdenum sulphur)—would do the job to perfection. The combination already works for other ITER systems, in some components of the Wendelstein stellarator, and in deep-space applications.


The design of the bearings is now finalized. Nuvia has produced and successfully tested scaled models (one-fourth and one-half of the actual size) and will now build a full-scale prototype along with a specific installation to host it, as no laboratory or testing facility in Europe can reproduce the monster loads to which the ITER Tokamak will be subjected.