A vision of the future 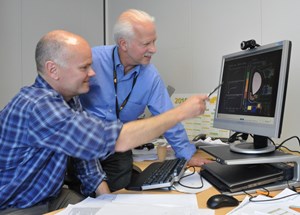 Anders Wallander and Thomas Casper: working on RDBS has provided strong linkage between CODAC engineers and Fusion Science & Technology (FST) physicists.
The year is sometime around 2030. The place—the ITER Control Room. All attention is focused on a large screen that displays graphs, figures, colours and a cutaway view of the vacuum vessel with a pulsing "D" shape at its centre.


A full deuterium-tritium (DT) plasma shot is underway. It is not the first one, but a DT shot is never routine. At one point, cheers and applause resound—the present shot is just perfect ... all parameters nominal, the entire control system performing at its best.


Although this scene may belong to the future, the display screen can already be visualized thanks to a CODAC application that was recently developed by the ITER CODAC team and the DIII-D National Fusion Facility in San Diego. A precious tool, the real-time plasma boundary display system (RBDS) allows the presentation of data simulating actual plasma shots, based on different scenarios.


To the lay viewer, the on-screen simulation looks like just another animation. In reality, obtaining this "quick display overview" takes a few days' execution time on the Livermore National Laboratory computer cluster.


"Visualization, even at this early stage of the project, is very important," says CODAC Section Leader Anders Wallander. "It provides indications about what data we'll need and when we'll need it. It also allows us to validate the technologies chosen for CODAC." 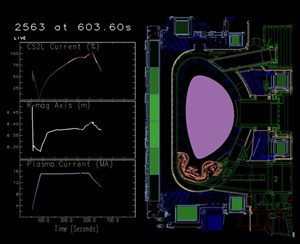 A precious tool for the ongoing work at ITER, the real-time plasma boundary display system (RBDS) allows to present data generated from different scenarios simulating actual plasma shots.
RBDS is part of the high performance networking (HPN) project that ITER partly contracted in 2009 to General Atomics, the private company that operates the DIII-D Tokamak. The project investigates and prototypes technologies for data transport architecture—a key issue in tokamak operation.
On the ITER side, working on RBDS has created strong ties between CODAC engineers and Fusion Science & Technology (FST) physicists—something Anders considers essential to the success of the project.


"There are several scientists in the Member countries doing plasma simulation," says Thomas Casper, the FST experimental physicist who participated in the project. "Soon, we'll make our visualization and data system available to them. It's part of the ITER philosophy: this huge project should drag in what was scattered until to now."