Share Tweet
Counting neutrons to measure fusion power
They may be small, but they have a big role to play in ITER. Pencil-sized micro fission chambers will be located close to the plasma to "count" neutrons during ITER operation—by measuring the neutron flux from the plasma, these highly precise devices will help diagnosticians calculate fusion power output.

A prototype micro fission chamber, with its mineral-insulated cable attached. Tiny detectors like these will be responsible for determining if ITER reaches its goal of generating 500 MW of fusion power for 500 seconds.
Each deuterium-tritium reaction in the ITER machine will produce one energetic helium nucleus and an even more energetic neutron. While the charged helium nucleus, also known as the alpha-particle, is immediately captured by the magnetic field and kept in the plasma, the neutron—with its absence of charge—will escape toward the wall of the plasma chamber. The energy of the alpha-particle is used to self-sustain the burning plasma; that of the neutron is ultimately the main output of the reactor.


Diagnostic physicists in ITER are interested in measuring neutron fluxes as they define the total fusion power. By measuring neutron emissivity, diagnosticians can provide important information to operators on reactor performance and operational profiles.


A number of neutron flux monitors will be positioned around the machine in diagnostic ports and both inside and outside the vacuum vessel to measure total neutron emissivity, expected to range from 10^14 n/s (neutrons per second) in pure deuterium (DD) plasmas and up to 10^21 n/s in deuterium-tritium (DT) plasmas. 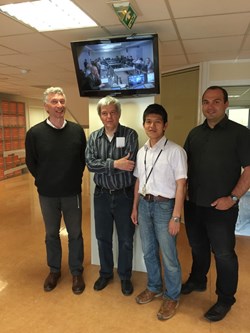 Robin Barnsley (ITER ex-vessel diagnostics section leader), Luciano Bertalot (ITER neutron diagnostics physicist), Masao Ishikawa (micro fission chamber design developer, ITER Japan), and Vitaly Krasilnikov (ITER neutron diagnostics engineer-physicist) collaborate on the pencil-sized detectors that will have a big role to play in ITER.
The most robust detectors for neutron flux measurements are the fission chambers. A fission chamber is an argon-gas-filled container, whose walls are coated with a thin layer of fissile material such as uranium 235 (U235) or uranium 238 (U238). When a neutron hits a uranium atom, the latter splits and a large amount of energy is released. As the energetic debris travels through the gas-filled volume of the chamber the gas is ionized, and high voltage applied to the electrodes inside the fission chamber results in a current that can be measured. In a later step, the value of this current is calculated into the fusion power of ITER.


In 2012 the ITER Organization signed a Procurement Arrangement with the Japanese Domestic Agency for the design, manufacture and supply of a diagnostic called micro fission chambers. Four units—containing three micro fission chambers each—will be fitted into the gap between the blanket shield modules and the vacuum vessel.


The neutron fluxes in the areas chosen for the micro fission chambers are extremely high, allowing for the detector modules to be extremely small, with low uranium content (hence the "micro" of their name).


Placing the micro fission chambers close to the plasma also helps to diminish the "scattering effect" and to measure the most direct neutron fluxes. When a neutron travels through material it can "scatter," losing part of its energy. The sensitivity of neutron detectors is energy-dependent; those that are installed far from the plasma are exposed to broad spectra of neutron energies, causing measurement accuracy degradation and making sophisticated neutronic calculations necessary for the interpretation of the data.


Given their location on the inner wall of the vacuum vessel, the front-end components of the detectors will have to be available on site in time for ITER's first assembly campaign when the vessel segments are welded together. It is vital that the installation of these components goes flawlessly, because once the blankets are installed there will be no access to the micro fission chambers for many years. R&D and prototype development are currently underway in Japan to ensure the reliability of all component parts.


Recently, the manufacturing of the mineral-insulated cables that will carry the signal from the detectors to the preamplifiers outside of the vessel was completed. These cables were exposed to 360°C temperature tests for many cycles, followed by vibration, bending, and helium leak tests. All the tests were passed with flying colours. Kiyoshi Itami, the responsible officer of Japanese diagnostic systems, concludes: "We are happy to have achieved this R&D milestone on time and plan to keep the same momentum up to the final delivery of the micro fission chamber system."


The micro fission chambers from Japan will be among the first diagnostics installed on ITER.