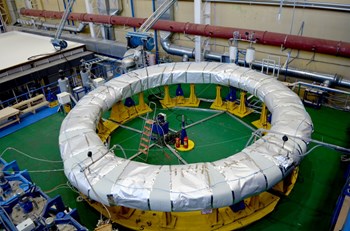 
Poloidal field coils are built from niobium-titanium (NbTi) superconductors that are wound into flat coils called pancakes. Winding is a multistage process during which conductor from two spools ("double-hand") is wrapped with insulating tape and wound into the dimensions corresponding to each coil.


Because they are key to the successful operation of the machine, the magnets are subject to strict ITER Organization requirements at every stage of the manufacturing process, from qualifying materials to controlling the properties of the finished items. The Russian specialists first received the green light on a full-scale prototype double pancake before starting serial production.


Most of the winding equipment has been designed, manufactured, and tested at the Efremov Institute, which also developed some of the poloidal field coil manufacturing processes; JSC "SNSP" has contributed a number of science-based technologies. In 2014, all equipment was transported to the Srednenevsky Shipbuilding Plant, located in an area which is a well suited to the needs of transporting the completed component.


Eight double pancakes will be stacked to form the final coil, which will weigh 300 tonnes.