Share Tweet
First D-shaped winding pack: last activities before transfer
European contractors have completed the fabrication of the first ITER toroidal field winding pack. A series of mechanical and electrical tests now remain before the 110-tonne component is transferred to another facility for cold testing and final insertion into a stainless steel case. 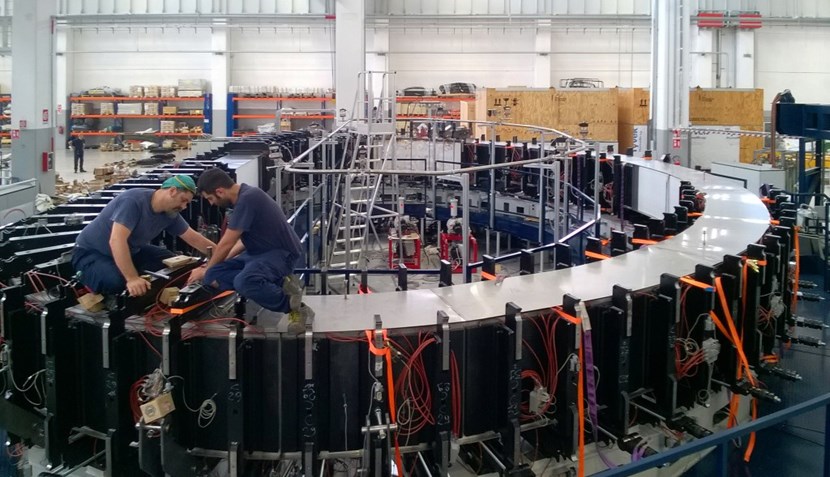 In one of the last fabrication steps, the seven-layer toroidal field winding pack is hardened (''impregnated'') with resin. At the ASG facility in La Spezia, Italy, a mould was built directly on the component. (Pictured, approximately 100 clamps compress the insulation and ensure that that the final product, once impregnated, respects the specified dimensions.)
In ITER 18 toroidal field magnets—each made up of a winding pack and stainless steel coil case—will surround the vacuum vessel to confine the particles of the ITER plasma in a magnetic field. Europe has the procurement responsibility for half the winding packs plus one spare; Japan is producing the other nine winding packs as well as all stainless steel coil cases.


Europe has divided the production of these giant, high-tech components into two contracts: the ASG consortium (ASG Superconductors, Italy; Iberdrola Ingeneria, Spain; and Elytt Energy, Spain) is charged with the supply of ten winding packs, while a second contractor—SIMIC S.p.A. will perform the cold testing of the winding packs and their final insertion into stainless steel coil cases manufactured by Japan.


"For the European Domestic Agency and its winding pack supplier ASG, the completion of the first winding pack is an important milestone," says Deputy Magnet Division Head Arnaud Devred, who is currently the acting leader for the Toroidal Field Coil Section. "After having successfully qualified all of the different steps in the manufacturing process, this is the first complete realization of work scope from A to Z."


Resin impregnation intervenes at both an earlier fabrication stage (when each individual double pancake is hardened through impregnation) and at the end of the process on the complete winding pack (produced by stacking seven double pancakes). This important fabrication step electrically insulates the component and creates a rigid assembly. 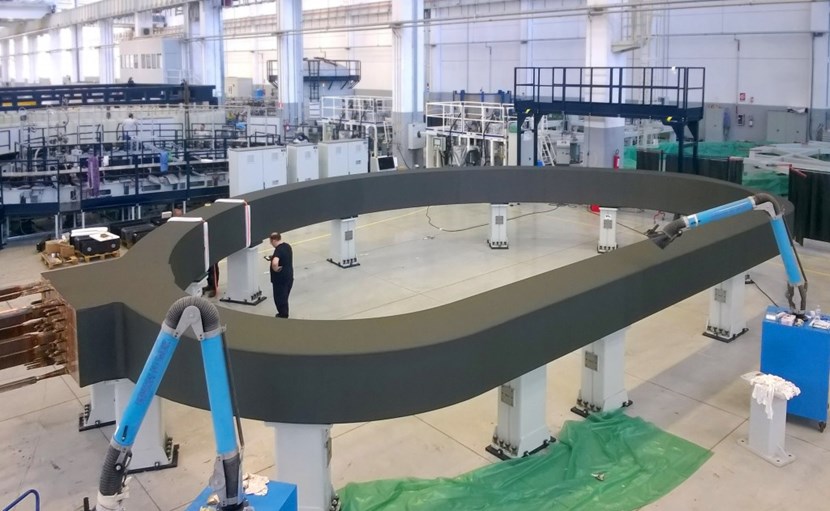 The final winding pack, extracted from its impregnation mould and coated with a special conductive paint. Workers are now finalizing electrical joints and external helium piping before a series of tests begins to verify leak tightness and the quality of electrical insulation.
To prepare for the impregnation step, the ASG consortium built a mould directly around the component. After implementation of fiberglass ground insulation, stainless plates—lined on the inside with a debonding agent—were mounted around the winding pack. Approximately 100 clamps (top photo) were positioned and tightened to compress the insulation and ensure that that the final product, once impregnated, respects the specified dimensions.


With the mould in place around the winding pack, tests were performed to verify leak tightness and the winding was heat-dried in vacuum at 110 ˚C to eliminate any trapped vapour or humidity. Resin was injected at the bottom of the mould at a moderate temperature while the mould was evacuated to ensure that all recesses were filled. Finally, the winding pack was cured at temperatures reaching 155 ˚C over five days.


Once extracted from its purpose-built mould, the dimensions and condition of the winding pack were verified and a special conductive paint (bottom photo) was applied to mitigate the risk of partial discharge in case of high voltage and degraded vacuum environment.


A number of final checks now remain before the first European winding pack can be transferred to SIMIC for cold testing and insertion into its coil case. Among these are the demanding Paschen voltage tests, carried out in a helium environment. These are the most sensitive quality checks for electrical insulation.


See the original article on the European Domestic Agency website.