Share Tweet
Last stages of assembly for behemoth tool
Among the dozens of specially designed tools that will have a role to play in positioning and assembling ITER's giant machine components, two stand—literally—a head and shoulders above the others. As tall as a seven-storey building, made of hundreds of tonnes of steel, the sector sub-assembly tools will support charges of up to 1,200 tonnes during out-of-pit pre-assembly activities for the ITER vacuum vessel sectors. With factory assembly nearly finalized, Korea expects to deliver the first tool to the ITER site in June. 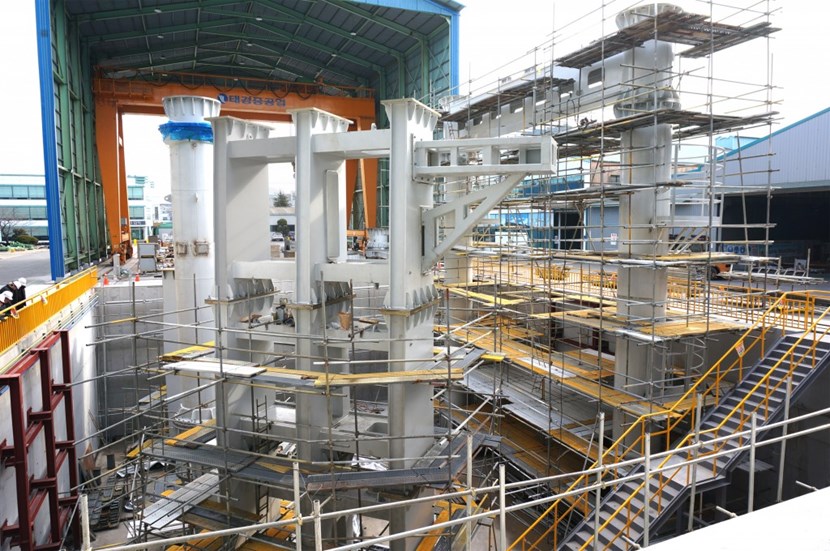 The first of two sector sub-assembly tools in its assembly pit at Taekyung Heavy Industries in Korea. The tool's inboard and outboard columns were machined in sections and bolted together; interior ribbing adds structural strength. All told, the tool is designed to support the weight of one vacuum vessel sector, two toroidal field coils and thermal shielding ... or 1,200 tonnes.
At Taekyung Heavy Industries (THI) in Changwon, South Korea, a special assembly area has been created for ITER's largest custom-designed tool. The base elements are nearly out of sight, installed in a pit dug eight metres into the ground. The towering columns are surrounded by scaffolding. Nearby, a sliding warehouse structure stands ready to protect the work zone in the case of inclement weather.


"At 22 metres tall and 860 tonnes, the sector sub-assembly tools are certainly the biggest of the ITER assembly tools that Korea will procure for ITER," says Hyung Yeol Yang, from ITER's Tokamak Assembly Section/Division. "But the challenge is not in their size, even if fabrication does require a huge milling machine, capable of machining components up to 30 metres in length. The challenge is in the function of the tool itself—supporting 440-tonne vacuum vessel sectors while two 310-tonne toroidal field coils are positioned and aligned to millimetre-level assembly tolerances." 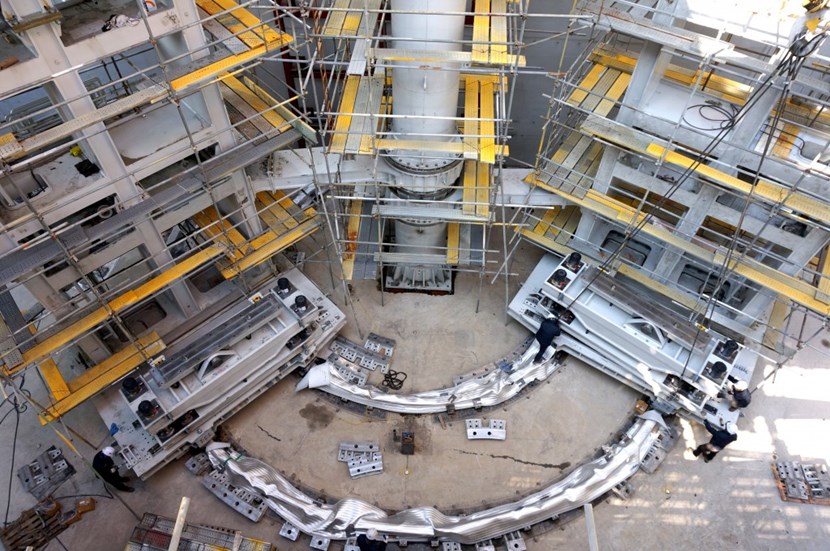 Precision hydraulics will drive the tool's lateral wings, which rotate to deliver the toroidal field coils to their installation fixtures on the 40° vacuum vessel sector, suspended in the centre. The different structural elements of the first tool have been manufactured and their in-factory assembly is 70% complete.
ITER's plasma chamber, or vacuum vessel, will be formed from nine wedge-shaped steel sectors that measure over 14 metres in height and weigh 440 tonnes. Each one will be shipped from manufacturing facilities in Europe and Korea on horizontal transport frames. Once delivered to the ITER Assembly Hall—and following vacuum tests and the installation of magnetic diagnostics—the 40° sectors will be moved to a vertical position, or "upended" in ITER parlance.


That's where the behemoth sector sub-assembly tools enter the scene. The tools are designed to suspend each sector from the top while vacuum vessel thermal shielding and a pair of toroidal field coils are installed.


"The main structure, rotating frames and actuator system of these hydraulic-powered tools were all tested on a 1:5-scale mockup," reports Hyung Yeol.  "This important qualification step led to improvements in the design, a final design review, and the green light for the start of manufacturing which got off to a start in March 2016." 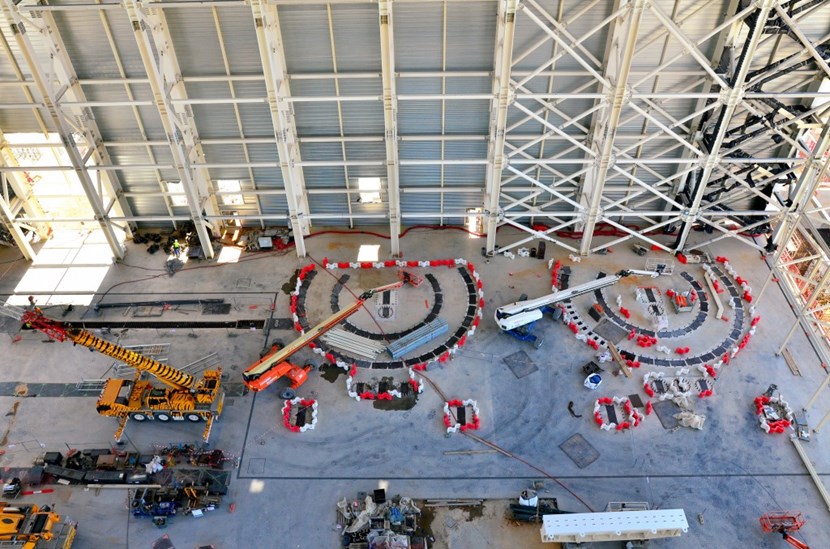 An area of the ITER Assembly Hall has been specially reinforced to receive the incredible weight of the sector sub-assembly tools (860 tonnes each) and the components they support (1,200 tonnes). Two identical tools will allow vacuum vessel pre-assembly work to proceed more quickly.
Today, the assembly of the structure of the first tool has progressed to 70 percent, the actuator system has been delivered for installation, and factory acceptance tests are planned to verify that the tool performs the required movements without jamming or malfunction and that the required alignment can be reached.


If all goes well, the tool will be disassembled and shipped in 54 packages to the ITER Organization before the end of June. Re-assembly activities on site and final site acceptance tests—including a load test of 310 tonnes—will be supervised by THI, with work mainly carried out by THI's local contractor CNIM (France).


Fabrication activities will begin on the second sector sub-assembly tool in Korea as soon as the first is shipped.


The Korean Domestic Agency is responsible for the design and fabrication of 43 assembly tools. For the sector sub-assembly tools, its main contractor SFA Engineering Corp has contracted with Taekyung Heavy Industries for the fabrication of all structures, sub-assembly and testing, and on-site installation. Precision hydraulic actuators are supplied by ENERPAC (Spain).


* Six degrees of freedom refers to adjustability along X, Y and Z axes (up and down, side to side, forward and backward) as well as in rotational directions relative to the axes (swivel, tilt, pivot).