Correction coils: from qualification to production

Share Tweet
Correction coils: from qualification to production
A group of 18 superconducting correction coils will be distributed around the ITER Tokamak at three levels. Much thinner and lighter than ITER's massive toroidal field and poloidal field magnets, their role is to reduce magnetic error fields caused by imperfections in the position and geometry of the main coils. Series production started last year at an ASIPP laboratory in Hefei, China, where a multiyear qualification program has been carried out to ensure that the correction coils can be produced to specification despite unusual shapes and very demanding precision requirements. 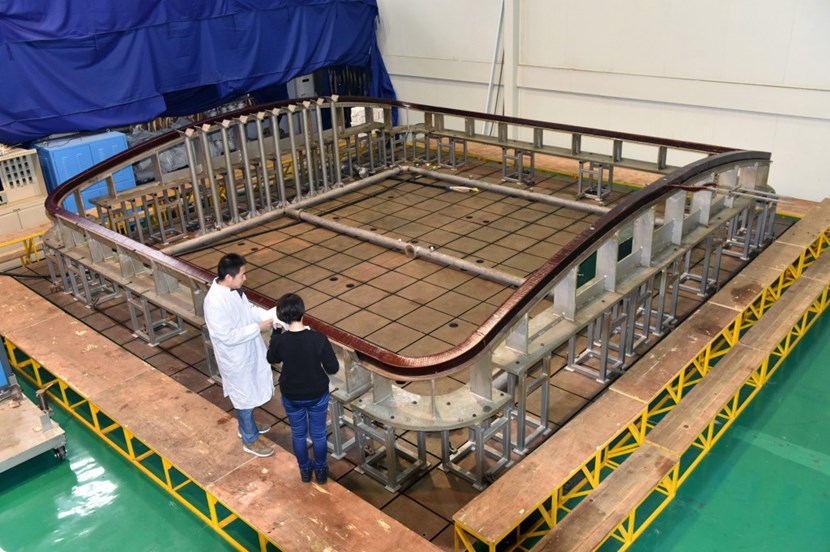 The full-scale dummy side correction coil prototype in this photo was used to qualify winding and impregnation manufacturing steps. At ASIPP in Hefei, a multiyear qualification program has been carried out to ensure that the correction coils can be produced to specification despite unusual shapes and very demanding precision requirements.
Compared to ITER's huge toroidal field and poloidal field magnet systems, the correction coils appear nearly pencil-thin in the machine schematics. Weighing a maximum of 4.5 tonnes and measuring up to 8.3 metres, the correction coils are the very smallest of the superconducting magnets.


However the irregular shapes of the coils, as well as limited space for installation, creates a number of manufacturing challenges. A lengthy qualification process has been carried out by Institute of Plasma Physics of the Chinese Academy of Sciences (ASIPP), the Chinese Domestic Agency contractor responsible for the fabrication of all 18 correction coil assemblies.


Correction coils will be inserted between the toroidal field and poloidal field magnet systems in three locations around the machine: six at the top, six at the bottom, and six at mid-plane (side). The identical top and bottom coils (TCC and BCC) are rectangles that bend inward to espouse the torus shape of the vacuum vessel; the six side coils (SCC) are non-planar squares. Similar to the toroidal and poloidal magnet coils, the correction coils will be formed from lengths of superconductor wound into layers called "pancakes," insulated, vacuum pressure impregnated, and inserted inside a stainless steel case. 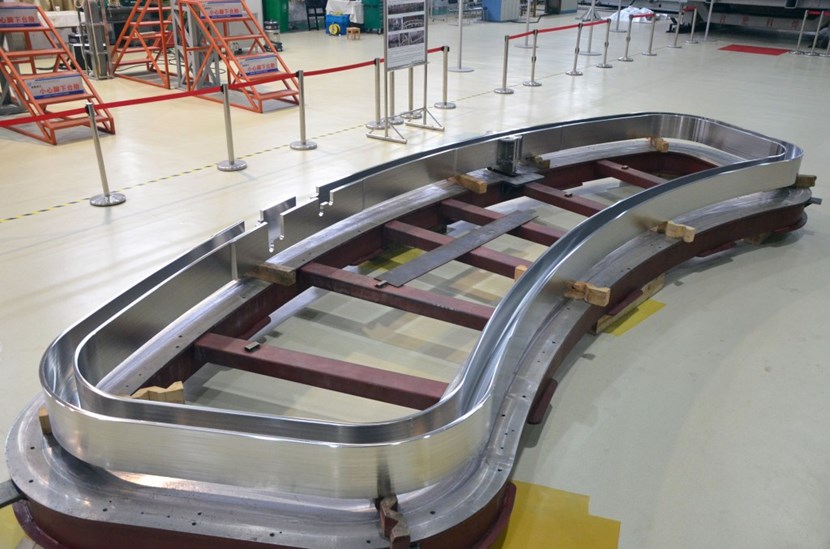 Work on the qualification of the coil case--the stainless steel outer shell—is progressing well. The raw material for the coil cases has been hot-rolled and extruded in prototype trials and a full-size U-shape section has been assembled, representing the bottom correction coil casing (photo).
To prepare for series production, the winding line and tooling at ASIPP was first qualified according to ITER Organization procedures in 2013. ASIPP technicians then began winding a full-size mockup of the bottom correction coil and completed its impregnation in 2014; since that date they have completed the first production bottom correction coil winding pack (eight layers of niobium-titanium superconductor) and are nearly through the impregnation stage. The seven helium inlets of the winding pack have also passed inspections successfully.


In addition, qualification of the coil case—the stainless steel outer shell that provides the structural element to the assembly—is underway. The raw material for the coil cases has been hot-rolled and extruded in prototype trials and a full-size U-shape section has been assembled, representing the bottom correction coil casing. Last but not least, the qualification of the laser closure welding for the coil case will be the final challenge to complete, ending the component qualification phase at ASIPP. To overcome this final hurdle, ASIPP has been developing a high-power laser welding machine to achieve the rigorous quality specifications in the welding of the correction coil. 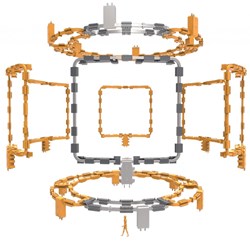 The correction coils will be arranged in groups of six around the toroidal circumference above, at and below the mid-plane of the vacuum vessel.
"ASIPP has achieved remarkable progress in manufacturing and examination for the most of critical components of the correction coils in just three years," says Fabrice Simon, of ITER's Magnet Division. "This includes the development of the helium inlet welding process and 100 percent volumetric examination, as well as the development of extruded parts of high quality stainless steel for the coil casing. The successful achievement of the qualification phases has provided a solid base for the kickoff of series production. Now, the second bottom correction coil winding is underway without any sign of schedule delay."


Throughout the lengthy qualification activities, regular reviews have permitted all actors—manufacturer ASIPP as well as magnet specialists from the Chinese Domestic Agency and the ITER Organization—to validate quality and manufacturability. After two manufacturing readiness reviews held in 2013 and 2016 related to the coil winding, a third review planned in March 2017 will trigger the industrial production of the coil cases. A fourth and final review is planned at the end of 2017 for the very last stages of manufacturing, from the closure weld of the casing to the terminal service box.


The two last reviews will open the way for the full speed production of all 18 correction coils.