Share Tweet
Heat waves
Plasma is like a tenuous mist of particles—light atoms that have been dissociated into ions (the atom nucleus) and free-roaming electrons. In order to study plasma physics or to create the conditions that make fusion reactions possible, plasma must be heated to temperatures in the range of 150,000,000 °C—a feat achieved by communicating considerable quantities of energy to the particles. 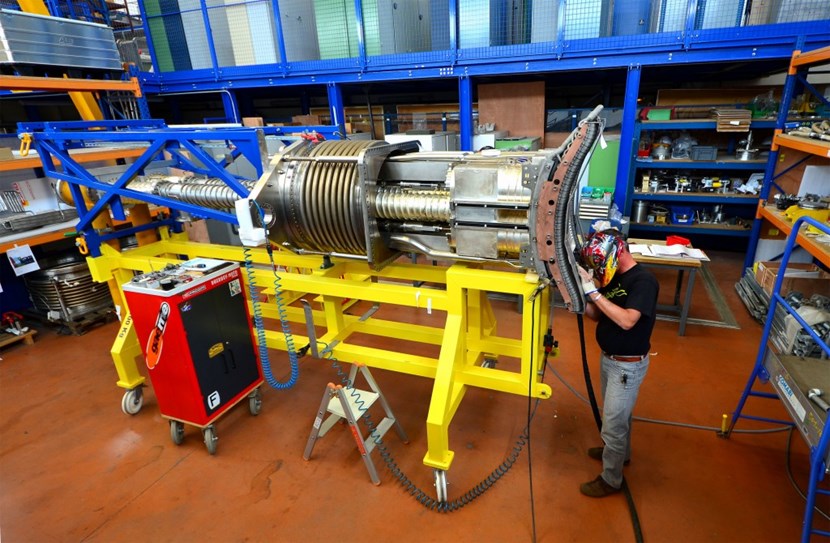 In an actively-cooled antenna, the quality of the welds, joints and surfaces is paramount. ''We have to absolutely guarantee 'zero leaks,''' explains Jean-Michel Bernard, the head of the Plasma Heating Group at the French Institute for Magnetic Fusion Research (IRFM).
In tokamaks, the technique most generally implemented is based on radio frequency (RF) waves, similar to the "waves" that carry radio programs over long distances.


But whereas the non-stop broadcasting of news or music from one end of a continent to another only requires a few dozen kilowatts of power, heating a plasma just a few centimetres away demands several megawatts.


In both cases, an antenna does the delivering: a thin metallic structure for radio; a massive, more complex antenna for plasma.


A few hundred metres from the ITER site, in a workshop near the tokamak WEST (the former Tore Supra, now equipped with an ITER-like divertor) such an antenna is in the last stages of assembly.


The 4.5-metre-long, three-tonne component is one of three identical antennas that will deliver radio waves into the plasma. Together, they form the ion cyclotron resonance heating system (ICRH), which, along with two lower hybrid¹ antennas, will heat WEST plasmas.


"The objective is to heat the plasma in order to deposit an ITER-relevant heat load of 10 MW per square metre² on WEST's tungsten divertor," explains Jean-Michel Bernard, the head of the Plasma Heating Group at the French Institute for Magnetic Fusion Research (IRFM).


Although the antenna itself is not "ITER-like," the heat load and the tungsten divertor are—once fully equipped with its heating system WEST will be an important test bench and risk limiter for ITER.


WEST's ICRH antennas were designed by engineers of the French Alternative Energies and Atomic Energy Commission (CEA) within the framework of a European collaboration with Belgium, Germany and Italy. Most of the antenna elements were produced by the Institute of Plasma Physics (ASIPP) in China as part of a collaboration initiated in 2013.


The antenna design draws a lot (and cannibalizes a few parts) from the "ancestors" that operated for more than 20 years in Tore Supra.


There are however two major differences. The first is related to ELMs—those bursts of energy and particles that are akin to solar eruptions and can represent 5 to 10 percent of the total energy stored in a fusion plasma.


For reasons that have to do with plasma shape and operational regime, ELMs did not occur in Tore Supra. They will, however, occur in WEST, causing sudden heat loads and variations in the density of the plasma—a phenomenon that will reduce the efficiency of the radiofrequency power coupling and can threaten the integrity of the system. 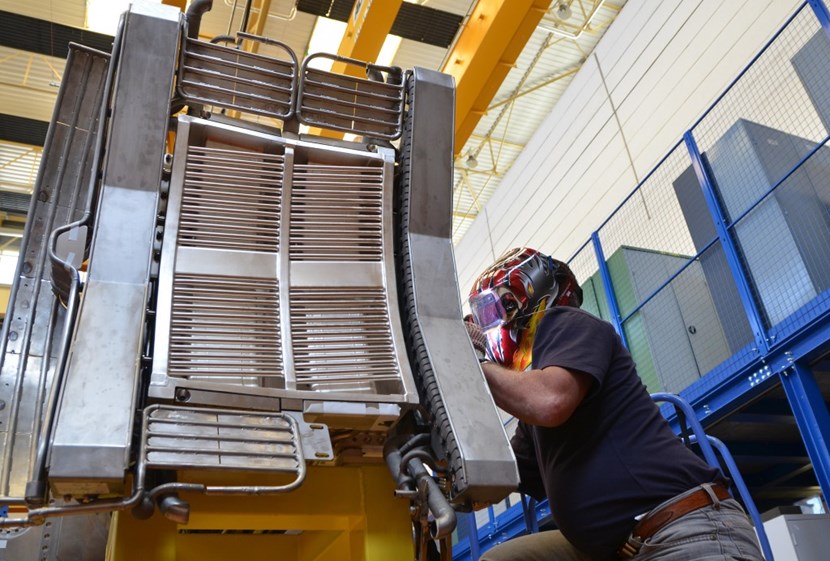 In a workshop near WEST (the former Tore Supra tokamak, now equipped with an ITER-like divertor) the first of three ICRH antennas is in the last stages of assembly.
"Variations in the density of the plasma generate variations in the loads that are fed back to the antenna. In order to protect the system's integrity while maintaining an optimal power coupling, we need to have devices—impedance transformers, variable capacitors, etc.—that allow for adaptation and power modulation."


In order to create ITER-relevant conditions and contribute (along with the lower hybrid system) to delivering the required heat load to the divertor, each ICRH antenna in WEST needs to operate at a power level of 3 MW for 30 seconds, or 1 MW for 1,000 seconds.


There is no way to achieve such numbers, ten times higher than in Tore Supra, without actively cooling the antennas.


"In terms of construction and assembly there is a world, a whole ocean, between a partially-cooled 'inertial' antenna like the ones we had in Tore Supra, and an actively-cooled component like those WEST requires," emphasizes Jean-Michel. "We have to absolutely guarantee 'zero leaks,' which is extremely challenging in terms of the mechanics of joints and surfaces."


At every stage of fabrication and assembly the sub-components are leak-tested and, when completed, the whole antenna will go through a battery of helium leak tests under relevant temperature conditions.


In the IRFM workshop, the first ion cyclotron antenna is in the final stages of completion and will be installed on WEST in the coming weeks, in time for the September experimental campaign. The second has just arrived and the third will arrive from China in July.


Standing on its steel frame, looking like an oversized, tormented trumpet, the ELM-resilient, continuous-wave antenna is an impressive piece of work.


It will, however, be dwarfed by its ITER equivalents³—two ICRH antennas that are each ten times more powerful and 45 tonnes heavier.


(¹) Lower hybrid resonance is another form of plasma heating which could be installed in ITER as a future upgrade.
(²) 10 MW/m² during 1000 s and 20 MW/m² during a few tens of seconds.
(³) ITER will be equipped with two 10 MW ICRH antennas (procured by Europe).