Share Tweet
On site | US "Burning Plasma Committee" visits ITER
February at ITER opened with a high-stakes visit from the Committee on A Strategic Plan for U.S. Burning Plasma Research. 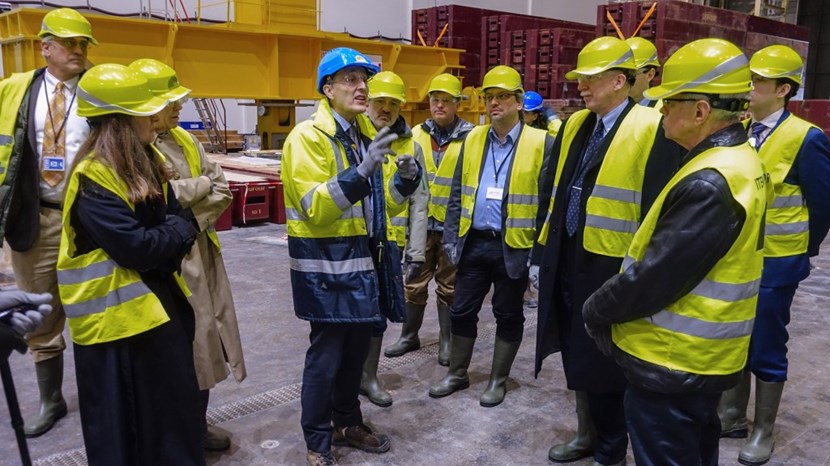 ITER Director-General Bernard Bigot explains aspects of the ITER assembly sequence to members of the Committee on A Strategic Plan for U.S. Burning Plasma Research.
The Committee, operating under the auspices of the US National Academies of Sciences, Engineering, and Medicine, has been charged with reviewing the overall state of magnetic confinement fusion research in the United States. A key outcome of the review is to be a recommended strategy for going forward—with or without ITER—in a way that preserves the US status as a leader in burning plasma research.


The full "statement of task" forming the charge to the Committee can be read here. On 21 December 2017 the Committee publicly released its interim report, a thorough analysis demonstrating the seriousness with which the Committee has taken its charge. The report made interesting observations regarding the importance of burning plasma research and the status of U.S. domestic research. For the ITER audience, two of the most interesting statements were the following:


The only existing project to create a burning plasma at the scale of a power plant is ITER, which is a major component of the U.S. fusion energy program.
A decision by the United States to withdraw from the ITER project as the primary experimental burning plasma component within a balanced long-term strategic plan for fusion energy could isolate U.S. fusion scientists from the international effort and would require the United States to develop a new approach to study a burning plasma.
[From page 3 of the interim report.]

Naturally, a critical aspect of the Committee's review was a visit to ITER to gain a first-hand look at the status of the project. Participation in the trip was strong—enough so that the Committee expanded its visit into a formal two-day meeting, and invited a number of EUROfusion officials as well to present the European fusion research program.


ITER's presentations to the Committee, and the discussions that ensued, were centred around the science, engineering, and management of the project.


As pointed out by Tim Luce, Head of the ITER Science & Operations Department, ITER by design will answer several long-standing fusion energy questions, such as: Does self-heating work? How large does a plasma need to be to achieve dominant self-heating? Is steady-state operation feasible in a burning plasma? Can helium ash be exhausted? Are plasmas disruption-free in stationary conditions?


ITER will also address a broad variety of plasma physics issues, ranging from the existence of "intrinsic" rotation to the mechanism of the L-H transition or the origin of isotope scaling. To the group of scientists that comprise the Committee, this discussion made especially compelling arguments about the value of a machine built to ITER's specifications.


Deputy Director-General Gyung-Su Lee and Head of the Project Control Office, Hans-Henrich Altfeld, respectively presented the engineering and project management aspects of ITER. In both cases, the presentations and ensuing discussions took a detailed look at both the challenges evoked and why the Committee should have confidence in a successful outcome.


The worksite tour, as might be expected, was the highlight of the meeting. Nothing quite explains the scale and complexity of the project, nor inspires a knowledgeable scientist with the ITER mission, like an in-person tour of the Tokamak Complex.


In short, ITER made a strong case for the value of international collaboration in the fusion research enterprise—a case that was well-received by the Committee members. As Director-General Bigot declared in his closing remarks to the group, "the future of fusion—like the future of all big science—is partnership.