Next phase for lower cylinder

Share Tweet
Cryostat | Next phase for lower cylinder
At approximately 250 tonnes, the second tier of the ITER cryostat's lower cylinder represents only 15 percent of the cryostat's total weight. Still, in order to weld together its many segments, no less than 1.3 tonnes of filling metal will be required—another amazing figure that opens a window into the unique world of the super-massive ITER components ... 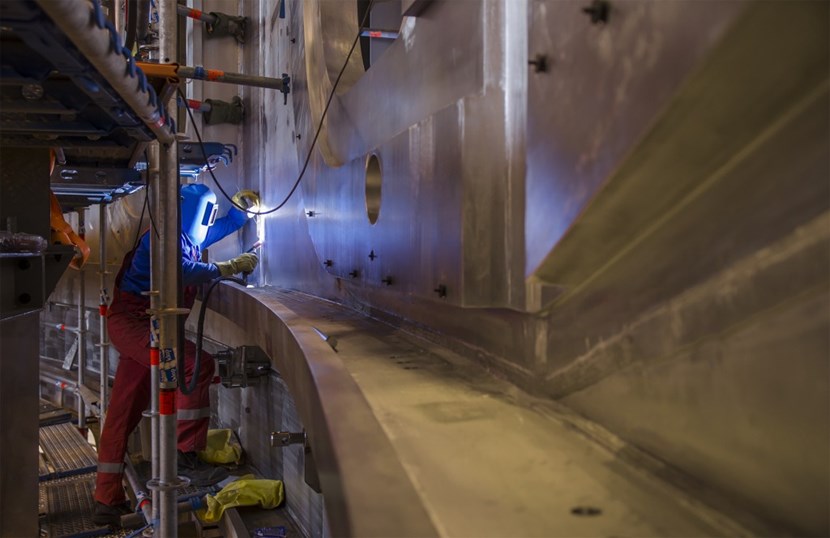 Working in pairs, one man on either side of the massive steel plates, welders will use approximately 1.3 tonnes of filling metal to finalize the welding of the second tier of the cryostat's lower cylinder.
Following a traditional coconut ceremony, welding operations began on 21 February in the onsite Cryostat Workshop for the second level (tier two) of the lower cylinder.


Operating in tandem, one on either side of the cylinder's steel plates, welders will progressively fill the 5.2-metre-high, 50-millimetre-wide, trough-shaped seams between the segments using a technique called "butt welding." The total length of the welds for this part of the lower cylinder will add up to 160 metres.


Controlling distortions is always an issue when welding large high-tech components. "In the ITER cryostat, because of the number of openings, ports and penetrations and also because of the sheer mass of welds involved, welding is a considerable challenge", explains Vikas Dube, the responsible officer for manufacturing activities in the workshop.


Welding operations on the second tier of the lower cylinder should be complete by late March and the whole assembly (tiers one and two) is expected to be ready for factory acceptance testing in June.