How do neutrons live and die?

Share Tweet
Question of the week | How do neutrons live and die?
Living without a partner dramatically reduces one's life expectancy. And what is true for human beings is even truer for neutrons. Bound to a proton inside an atomic nucleus, a neutron can expect to live forever; alone in the world it barely survives more than ten minutes. 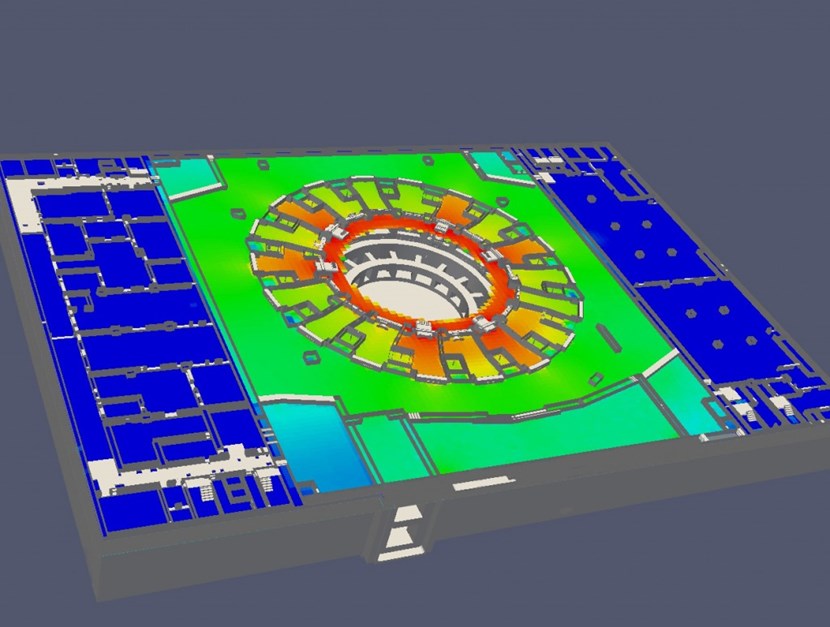 A simulation of neutron flux inside the Tokamak Building. (The white area at the centre is occupied by the machine.) The drawing clearly shows the obstacles that stand in the way of the exiting neutrons: the bioshield that closely encircles the machine; the outer boundary of the port cells (in white), and the external walls. Beyond the walls, only ''a handful'' of neutrons will survive—undistinguishable by then from the natural background ''noise.''
Lone—or "free"—neutrons are created naturally by cosmic rays interacting with the upper layers of the atmosphere. During their short trip to the Earth's surface, their destiny depends on what they encounter.


Because matter is mostly void, a fair amount of "cosmogenic" neutrons will zip through the air, not encountering anything. Others will collide with whatever particle—nitrogen, oxygen, carbon—that happens to be in their way.


Depending on the incoming neutron's energy—and some of them can be extremely energetic¹—and depending also on the latitude and altitude of the encounter and on the nature of the particle, different things may happen. Michael Loughlin, ITER Nuclear Shielding & Analysis Coordinator, explains: "A neutron can kick out a proton or another neutron from the nucleus it collides with; it can be absorbed and give birth to an isotope (that's how carbon 14 is created); or it can just bounce off the 'surface' of the nucleus and lose energy in the process."


Of all the neutrons produced in the atmosphere, only a few will reach the Earth's surface. Depending on the location and altitude of their landing, they will rain down at the rate of 100-300 neutrons per second per square metre. Over eons of evolution, living things have adapted to cope with this neutron drizzle.


If they have retained enough energy—and if their lifespan has not expired—neutrons may get a last chance to join a nucleus. The soil on the surface of the Earth offers more mating options than the atmosphere, so the cosmogenic neutrons can be absorbed by iron, silicon, potassium, etc.


When a neutron's time is up it dies a quick death, decaying into a proton, an electron and a neutrino².


And of course neutrons are central to fusion energy, both as a blessing and as a safety issue.


The neutrons from the fusion reaction inside the vacuum vessel generate the heat that, in a fusion plant, will initiate the electricity-producing process. They will also be put to use, in a later operational stage, to experiment tritium production inside the machine.


At full power, the ITER machine will generate one hundred billion billions highly energetic neutrons per second. Compared to the natural drizzle, it will be a non-stop hurricane. And this is something living things and the environment needs to be protected from.


The rules governing ITER's fusion neutrons are the same as those governing the passage of cosmogenic neutrons through the atmosphere, but the environment they will encounter is radically different. Instead of thin air, the fusion neutrons travelling at approximately 51,000 kilometres per second (17 percent of the speed of light!) will face a succession of daunting physical obstacles, some of them exceptionally dense.


Beryllium in the shielding blankets; high-strength copper and stainless steel in the vacuum vessel's first wall; ultra-dense neutron-hungry borated concrete³ in the bioshield—these materials will contribute to absorbing the neutron flux from the fusion reaction and keep radiation escaping to the environment to a minimum. But given the proportion of void in even the densest materials, some neutrons will pass all the obstacles unscathed.


How many? "A handful," answers Michael. And nothing, really, to worry about—the survivors will be so few that they will be undistinguishable from the natural background neutron noise.


¹ A small proportion of cosmogenic neutrons have energy in the range of 28 MeV — twice that of fusion neutrons.
² The electron and the proton will slow down and eventually combine with other protons and electrons to form a new nucleus. As for the neutrino, it will head off into space never to be seen again.
³ The isotope Boron 10 has a strong appetite for neutrons. In the areas of the ITER bioshield that are the most exposed to the neutron flux, a concrete formulation that includes 0.3 percent of boron will be used.