Be clean, be strong

Share Tweet
Plasma physics | Be clean, be strong
To achieve maximum fusion efficiency in a tokamak device it is essential to limit the impurities in the plasma. But this can be a challenge, as interaction between the hot plasma and the material surfaces of the vacuum vessel causes material particles to detach and enter the swirling cloud of gas. 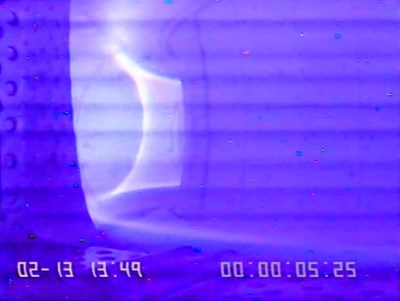 A deuterium plasma in WEST, the rejuvenated Tore Supra tokamak, now being equipped with a tungsten divertor to act as a test bed for ITER. The visible light-emitting regions at the edge of the plasma are the coolest.
The laws of physics dictate the maximum plasma density that can be achieved for a given current in a tokamak, which means that in ITER—as in other tokamak devices—there will be an upper limit to the number of atoms that can be confined.


Within this limit, it is important that the plasma contain as many atoms as possible that are capable of reacting to produce fusion—in ITER's case, atoms of deuterium and tritium.


Even in trace amounts, other atoms ("impurities") dilute the core of the plasma by taking the space that could be occupied by the fusion fuels, resulting in fewer reactions and a reduction in energy production. And because fusion reactions occur in a roughly proportional manner to the square of fuel density, the "multiplier" effect sets in quickly—fewer fuel atoms result in a dramatic drop-off in fusion reactions, while more fuel results in a rapid increase.


Impurities originate from vacuum vessel and the in-vessel component materials ... iron from the steel components, beryllium from the top layers of the first-wall panels protecting the vacuum vessel, and tungsten from the divertor targets.


Impurities not only dilute the plasma but—depending on the physical properties of the atoms involved (the number of electrons)—they can also cool it to differing degrees. "The process is similar to that in a fluorescent lamp," explains Alberto Loarte, who leads the Confinement & Modelling Section at ITER. "The electrons of the impurity atoms run into the electrons in the plasma and drain their energy, re-emitting it as electromagnetic radiation—including visible light."


The heavier elements, in particular, drain a lot of energy from the plasma through radiation because of a high number of electrons (tungsten has 74). The energy lost through impurity radiation cools the plasma down and the fusion reactions stop.


In ITER, to keep these radiative losses to a minimum, the divertor will be working from its position at the bottom of the machine to continually exhaust impurities from the plasma and limit contamination.


The very properties that make impurities unwelcome in the core of the plasma, however, can be applied to beneficial effect in the plasma edge region.


Because the energy confinement provided by the machine's magnetic fields is not perfect, large power fluxes can find their way to the edge of the plasma and onto the divertor targets. To avoid localized depositions that would be too high for the material components to withstand, scientists will inject impurity gases at the plasma edge. The radiative properties of the impurities will act to reduce the power fluxes to the material elements by dissipating their energy over a larger zone.


As the plasma in this edge/divertor region is already at temperatures much lower than those required to produce fusion power, this plasma cooling will not affect fusion power production in ITER.