Share Tweet
First plasma | Temporary in-vessel protection
The vacuum vessel, the operating theatre of the ITER machine, needs to be protected against possible damage from the hot plasma at any given time during its operation. This also applies to the First Plasma phase when most ITER plant systems are started up and functional but some in-vessel components are not yet in place. 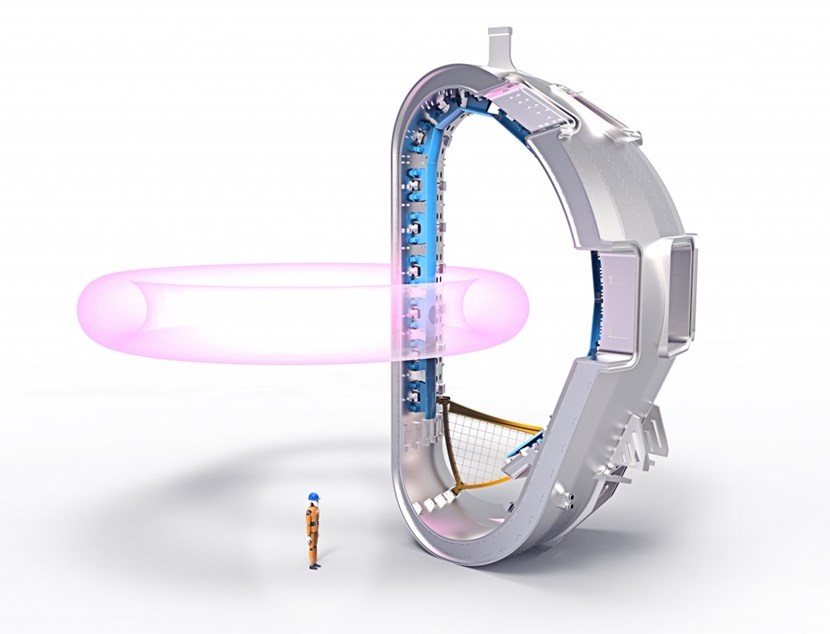 A cost-effective temporary protection system will be installed in the vacuum vessel during First Plasma to prevent damage of already installed components.
The blanket and the divertor are among those components that will not have been installed yet at the time of First Plasma. In addition to their primary functions, they also serve as vital protection for other in-vessel equipment. In their absence, temporary components will protect the vacuum vessel and other equipment already in place such as in-vessel wiring and diagnostics.*


The initial plasma will be a simple hydrogen plasma. It will have a circular shape rather than the vertically-elongated plasma shape of full fusion operation. These initial plasmas are expected to be rather unpredictable, and operators will have relatively little control over the movement of the plasma at this point. Ryan Hunt, an engineer working on the first plasma protection components, notes that, within a couple of milliseconds, the start-up plasma could move in any direction inside the vacuum vessel. "In any such cases, we want it to be running into one of our protection systems rather than into any of the in-vessel installations," says Hunt.


At the heart of this skeletal protection system are temporary limiters, in-vessel protection elements for low energy plasmas copied from existing tokamaks. In ITER they are only used for the six months of the First Plasma operation. The four D-shaped poloidal loops have the same outline as the baseline blanket and are equipped with 18 segments, with each segment shaped differently to accommodate the contour of the vacuum vessel.


This set-up keeps the plasma at a distance of about half a metre from the vessel walls at any given time, no matter in which direction it might move.

The First Plasma operation is in some ways analogous to the initial testing of a functional prototype. For example, when a new car engine is being developed, engineers will not run it to its top speed in the first tests. They will start by operating the functional prototype moderately, checking that all systems are working properly. Only then will they increase the speed and slowly inch towards full throttle.

The same goes for the ITER machine. First Plasma—the milestone phase to start in December 2025—will be the first in a series of stages of operation. This staged approach will enable key tokamak systems to be checked and fine-tuned prior to finalizing the commissioning of all in-vessel components. And much like with the testing of a new car engine, First Plasma is conducted at lower performance levels than envisaged for the fusion phase. During First Plasma ITER aims to achieve a plasma with a current of at least 100 kA (kilo-Amperes) for a period of at least 100 milliseconds as compared to a plasma current of up to 15 MA (Mega-Amperes) for a duration of about 450 seconds under full Deuterium-Tritium fusion operation.

Secondly, in the absence of the divertor at the bottom of the chamber, the temporary limiter's loops are complemented by a divertor replacement structure. Looking like an oddly shaped tennis racket, the device consists of a steel bar reaching across the vacuum vessel with a wire grid closing the gap to the very bottom. It functions as a physical interruption to any potential downward movement of the plasma.


The third element guards the vacuum vessel against possible damage by the electron cyclotron resonance heating (ECRH) beam which injects microwave energy from an upper port into the plasma to help energize and ionize it. Three copper-plated steel mirrors mounted to the inner vessel wall reflect the beam to an outboard equatorial port where a so-called "dump" absorbs the excess energy.


According to Hunt, these three First Plasma protection components—the temporary limiter, the divertor replacement structure, and the ECRH mirrors and beam dump—are in combination a simple and economical solution to protecting the vacuum vessel and already installed components against any damage during First Plasma operation.


"These elements are unique to ITER and fit the need of a simple and cost-effective protection system," says Hunt. All elements are easily installed and removed, as they are not welded but mechanically affixed to the vessel inner walls, with minimal later impact on machine operation. Components are made of steel with no costly material or high technology needed to ensure their full functionality.