Searching for the perfect shape 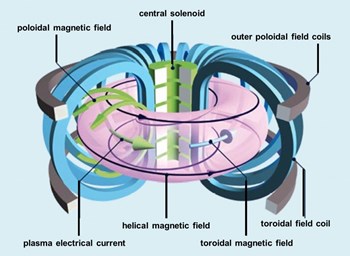 The perfect magnetic trap may not exist, but the torus-shaped tokamak is currently the fusion device with the best performance on record so far. Source: EFDA-JET (now EUROfusion)
The perfect magnetic trap doesn't exist. Over time plasma physicists have experimented with different types of cylinders, magnetic mirrors and circular or helical shapes to optimize control of the plasma. While R&D continues on many fusion energy configurations, the torus-shaped tokamak has yet to be dethroned as the highest performing fusion device.


What is the objective of a magnetic fusion trap? Fusion plasmas must remain in suspension in order to avoid contact between the superheated particles and the material vessel. As plasmas consist of electrically charged particles—positive ions and negative electrons—they can be controlled and confined by magnetic forces. ITER's magnetic "cage" will be created by superconducting coils shaping and controlling the plasma, as well as by electrical currents circulating within. 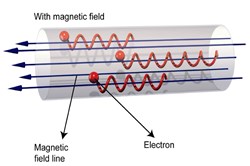 The first magnetic traps were open-ended cylinders.
In the early days of plasma research, physicists experimented with cylindrical systems—devices with coils around a tube that created linear magnetic fields running parallel to the vessel body. But the "holes" in the magnetic trap—the cylinder's open ends—resulted in high losses of energy as the plasma particles escaped.

Source: WikiHelper2134
Magnetic mirrors at the two openings of the device, essentially reflecting particles back into the cylinder, were an early attempt to solve the problem. Still, there were substantial losses of energy, despite the mirror trap.


The next solution came in the form of a closed system in which the magnetic field lines turn in on themselves—like a snake biting its tail—allowing the particles to spin indefinitely. The stellarator, with its complex geometry of twisted coils, was the first device to apply this shape, but using a complicated physical configuration that makes stellarators extremely challenging to build. 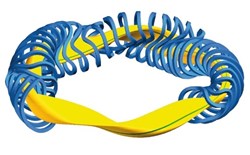 The complex geometry of the stellarator. Source: Max-Planck-Institut für Plasmaphysik
The torus-shaped tokamak, invented in Russia in the 1950s, also enables magnetic field lines that close to form a ring, but its smooth and symmetrical structure is much easier to build than the stellarator. However, there were early difficulties also with the tokamak design when experiments showed that electrically charged particles—while moving within the torus along magnetic field lines—would eventually drift off vertically, hit the walls and be lost.


This problem was resolved by inducing an electrical current inside the plasma, creating an additional magnetic field perpendicular to the current. As a result, the particles move in a three-dimensional curve, very much like a helix, and remain within the torus.


Today, the tokamak design rules supreme in the world of fusion. While innovators continue to experiment with a variety of devices, fuels, and approaches, the hydrogen-fuelled tokamak fusion reactor remains the device with the best performance on record so far.