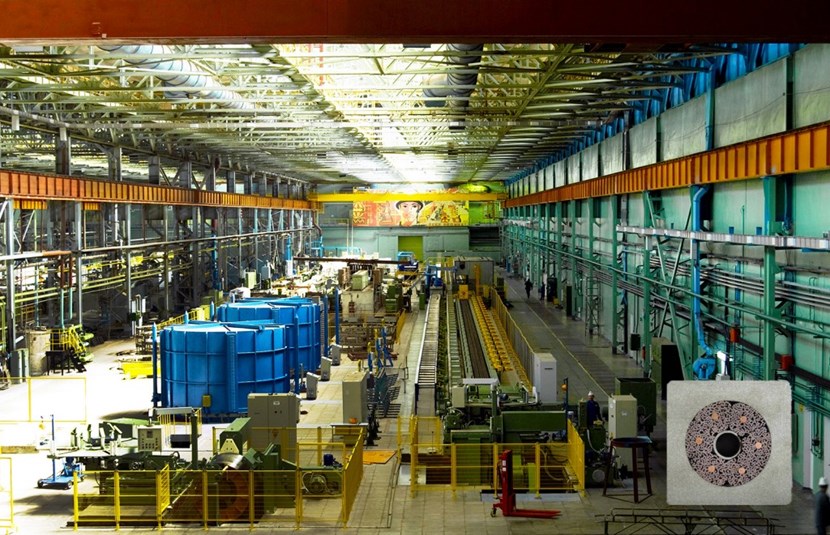 A view of the manufacturing workshop at the Chepetsky Mechanical Plant in Glazov, where more than 120 tonnes of niobium-titanium superconducting strands were produced for ITER. In the insert, the braided strands have been compacted around a cooling channel and pulled into a structural jacket.
Following the completion of its share of toroidal field superconductors in 2015, Russia completed its second magnet-related procurement package for ITER in June.


According to the terms of a Procurement Arrangement signed with the ITER Organization in 2009, Russia is responsible for supplying one-fifth of the niobium-titanium superconductors for ITER's ring-shaped poloidal field coils. Fabrication is a highly sophisticated, multi-stage process that requires absolute accuracy and compliance with stringent technological requirements.


The superconductors are formed from thin filaments of niobium-titanium superconducting material braided with copper strands to form cables, which are compacted and pulled into structural steel jackets. In Russia, a strand manufacturing workshop was organized at the Chepetsky Mechanical Plant (ChMP) in Udmurtia, where more than 100 units of the most advanced equipment were acquired. The manufacturing line was formally launched in April, 2009; the following year ChMP reached its optimum production pace.


Cabling was performed by the VNIIKP specialists in Podolsk (near Moscow) on the basis of novel technologies that were conceived and implemented by Russian scientists and engineers.


For the subsequent production stages, a unique arrangement was found with the European Domestic Agency, which is responsible for a similar share of poloidal field conductors. The two Domestic Agencies agreed that all niobium-titanium strands and cables—both Russian and European—would be manufactured in Russia, while all jacketing and compaction operations would be carried out by European contractors. The jacketing of the Russian cables was performed by the Italian Consortium for Applied Superconductivity (ICAS) with jacket material from Mannesmann Stainless Tubes (France). Electro-physical tests of full-scale conductor lengths were carried out on the SULTAN stand in Lausanne, Switzerland.


Special mention in the process of the Russian superconductor manufacturing belongs to the Bochvar Institute, whose staff was able to preserve and refine the superconducting technology that had been invented at the Institute in 1960s. This technology played a large role in the fulfillment of Russia's procurement obligations.