An insatiable appetite for neutrons 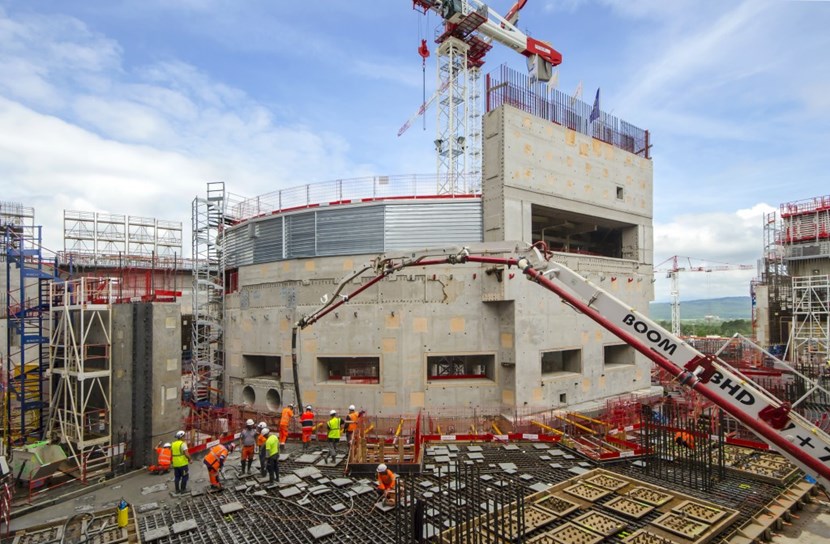 The pouring of borated heavy concrete began on 5 June in the area of the cooling water exchangers in the Tokamak Building and will continue throughout the summer, following the routing of the cooling system inside the building.
The neutron-eating concrete's voracity stems from the inclusion of boron, a light element whose isotope 10 acts as a trap for incoming neutrons.


In ITER, borated concrete is used when strong protection against neutrons is needed in areas of the Tokamak Complex where there is not enough space for ultra-thick walls like those of the bioshield.


By including a certain proportion of boron into a mix of high-density aggregates, borated concrete provides a shielding that is efficient while not being exceedingly thick.


"The formulation is a compromise between the mechanical properties that are expected from a structural concrete and the need for neutron absorbtion capacity," explains Laurent Patisson, head of ITER's Civil Structural Architecture Group. "The ITER Nuclear Integration Unit¹ ran models and calculations for several months before reaching the optimal adjustment."


The borated concrete that is being used in ITER is a high-density concrete (3.7 tonnes per cubic metre as compared to 2.4 tonnes for a standard formulation) that includes 0.3 percent of boron.


The neutron-eating element is obtained from ground colemanite aggregates, a borate mineral that is imported from Turkey.


Borated concrete has provided a solution to the long-standing issue of neutron emission from the activated water inside the primary loop of the Tokamak cooling water system. 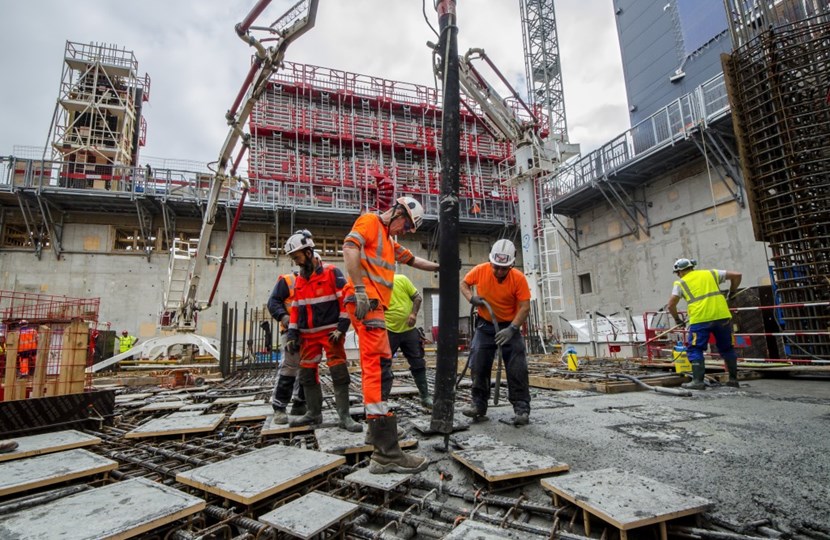 All in all, there will be approximately 10,000 tonnes of borated heavy concrete (3.7 tonnes per cubic metre as compared to 2.4 tonnes for a standard formulation) inside the Tokamak Building.
This closed loop snakes in between the inner and outer shells of the vacuum vessel and circulates between the lower and upper pipe chases of the Tokamak Building.


When exposed to the intense flux of neutrons from the fusion reaction, the oxygen present in the water generates short-lived radioactive isotopes of nitrogen—one (isotope 16) emitting a highly energetic gamma ray, the other (isotope 17) a fast neutron.


As the entry and exit points of the loop (the lower and upper pipe chases) are located outside the bioshield, specific shielding was needed to protect personnel and nearby electronics from this "secondary radiation."


The pouring of borated heavy concrete began early this month in the area of the cooling water exchangers in the Tokamak Building and will continue throughout the summer, following the routing of the cooling system inside the building.


All in all, there will be approximately 10,000 tonnes of borated concrete inside the Tokamak Building—eagerly waiting for the neutron feast to begin.


¹ The Nuclear Integration Unit was formed by the ITER Director-General in 2016 to ensure a consistent and fully integrated nuclear engineering approach in the project. Staffed with experts from the ITER Organization and the Domestic Agencies, the Unit is currently improving the radiation mapping in the Tokamak Complex.