US Energy Secretary Rick Perry gets first-hand look at ITER

Share Tweet
Visit | US Energy Secretary Rick Perry gets first-hand look at ITER
Marking an important step in the US review of ITER Project progress, on Wednesday 11 July ITER Organization received a visit from the Head of the United States Department of Energy, Secretary Rick Perry. The most senior US Administration official to ever visit the ITER Project, Mr Perry was accompanied by key members of his staff, as well as the US Ambassador to France,  Jamie McCourt. As Secretary Perry put it, this first-hand look at ITER construction and manufacturing will give him the insights and information needed to contribute credibly to discussions in Washington about the US role in ITER. 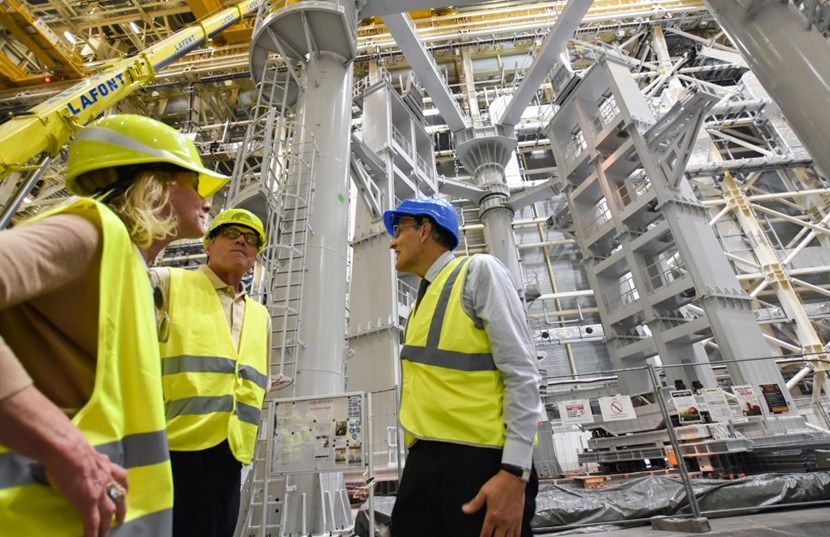 Accompanied by US Ambassador to France Jamie McCourt (left), Secretary Perry spent considerable time meeting with the ITER management and went on an extensive walking tour of the worksite.
It is a responsibility Secretary Perry takes seriously. He spent considerable time meeting with Director-General Bigot and several ITER managers, conducted a meticulous walking tour of the worksite, and set aside time to meet and answer questions with the US-origin ITER staff.


Secretary Perry is no stranger to big projects. As the longest serving Governor of the State of Texas, from December 2000 to January 2015, he presided over one of the largest expansions of renewable energy in history, significantly reducing carbon dioxide and other harmful emissions statewide and securing a broad energy mix including nuclear plants. 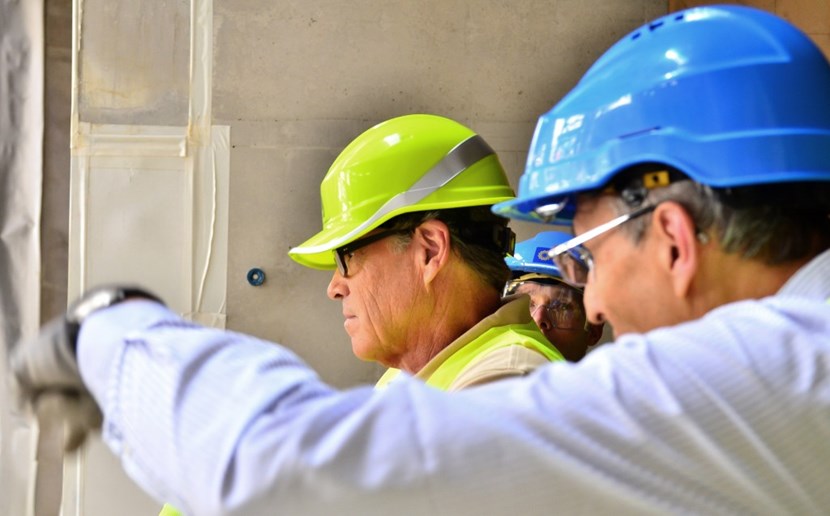 The Secretary's worksite tour included stops in the Tokamak Building (here he is seen observing the ongoing works on the cryostat crown), as well as the cryoplant, the Poloidal Field Coil Winding Facility, the Cryostat Workshop and the Assembly Hall.
Nor is Perry a stranger to France. In his first elected role, as the Texas Commissioner of Agriculture, he established extensive ties to French agricultural and viniculture programs. And he proudly reminded Director-General Bigot of the longstanding tradition of collaboration between France and Texas, extending back historically to the Republic of Texas (before its annexation as a US State), and the French "legation" (similar to an embassy), built in 1841, that still stands in Austin, not far from the Texas capitol building.


In discussions following the worksite visit, Secretary Perry made clear how positively impressed he was with the substantive progress made during the past three years: the solid evidence of strong project management, and the dedication of the ITER Organization's staff to bringing the project in on cost, on schedule, and on specification.


He took particular note of the broad range of US companies fabricating ITER components and the associated high-tech US jobs and innovation coming from participation in the project. As Director-General Bigot noted, it is ITER's ambition to serve as a model of successful international collaboration—and as a "smart deal" and positive return on investment for the US and all ITER Members.