Share Tweet
Promising research | Taming "ill-behaving" fusion plasmas
Certain types of magnetic distortions have proved beneficial in suppressing ELM-type instabilities at the edge of fusion plasmas—periodic bursts of energy that can lead to an accelerated erosion of the divertor and first-wall components. Up to now, though, the ideal 3D topology of the distortion field—among innumerable potential combinations—was unknown. As reported this month in Nature Physics, physicists from Korea and the United States have developed a key predictive capability of how to configure 3D magnetic fields optimally for ELM control, and successfully tested their predictions on the KSTAR tokamak in Korea. 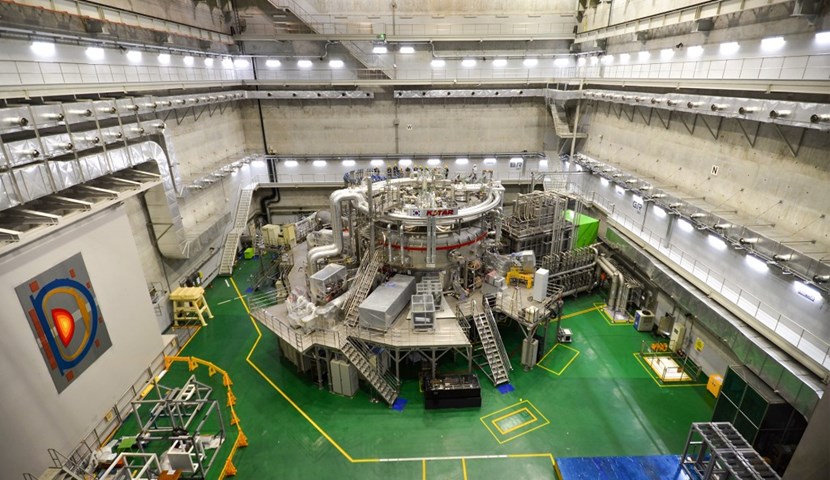 The KSTAR tokamak was the site of the recent experiments to test researchers' predictions. Advanced magnet controls and state-of-the-art imaging diagnostics make this Korean tokamak an ideal device for studying—and learning to mitigate—instabilities called edge localized modes (ELMs).
One of the critical challenges in nuclear fusion has been how to tame "ill-behaving" fusion plasmas that tend to intermittently outburst tremendous amounts of heat and particles from plasma edge. These so-called edge-localized-modes (ELMs) have the potential of eroding material from the plasma-facing components—material which can then penetrate and contaminate the plasma.


The physics understanding of ELMs and the development of a methodology to control ELM crashes have thus been a major focus of research in the fusion community for two decades. Among various ELM control means, the most promising method is to apply resonant magnetic perturbation (RMP) to the plasma edge—small magnetic fields that "perturb" the plasma edge, releasing the pressure in a measured way. The RMP technique has proved effective in influencing the unruly high-pressure ELM crashes, but identifying the correct 3D magnetic field configuration—among endless possibilities—has remained a challenge.


Now, a 14-person team led by physicist Jong-Kyu Park of the Princeton Plasma Physics Laboratory (PPPL), has identified a way to move forward. The research team—comprised of physicists from PPPL (US), the National Fusion Research Institute (NFRI) of Korea, and Oak Ridge National Laboratory (US)—has been able to map out an optimal 3D topology that suppresses ELM crashes at the plasma edge without destabilizing the plasma core.


"We demonstrate the phase-space visualization of the full 3D field-operating windows of a tokamak," explain the authors in their abstract, "which allows us to predict which configurations will maintain high confinement without magnetohydrodynamic instabilities in an entire region of plasmas."


The predictions were tested on the KSTAR tokamak at NFRI with excellent results. Equipped with ITER-like RMP systems, including unique in-vessel mid-row RMP capabilities, and state-of-the-art imaging diagnostics, KSTAR is one of the leading devices in the world for studying ELM-taming using precisely controlled 3D magnetic fields, and clarifying the physics mechanisms during critical transitions.


The researchers' work will allow plasma physicists to not only establish the modus operandi of 3D magnetic fields in order to suppress ELM crashes among innumerous combinations of 3D configurations, but also to contribute to designing the ideal position of 3D field coils in future reactors. The results are important to ITER, which will operate with a 3D coil system that is similarly configured to that of KSTAR.


Please also see the reports published on the NFRI (in Korean) and PPPL websites.