Share Tweet
Former minister and astronaut | "I can't think of a more meaningful project for the future of mankind"
During the year 2003 Claudie Haigneré, French minister of Research and New Technologies and a former astronaut¹, was a regular visitor to the Cadarache forest. There, near a mockup of the future ITER installation set up amid the venerable oaks and pines, she would tirelessly absorb the explanations provided by fusion scientists and affirm her "determination" to see ITER become a reality ... on that very spot. 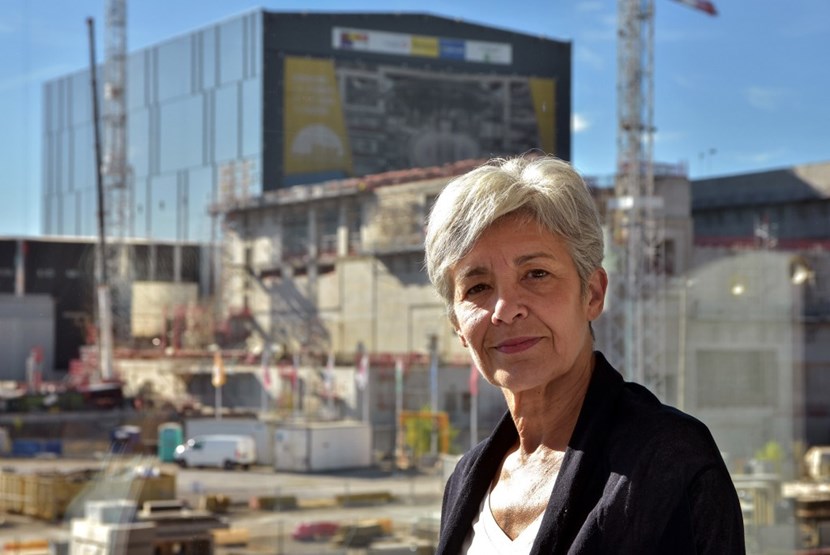 As France's Minister of Research in 2003, astronaut Claudie Haigneré was instrumental in promoting Europe's bid to host ITER. Fifteen years later, she can take the full measure of what her past involvement has contributed to.
The year 2003 was a decisive one for ITER. The United States, which had left the project in 1998, was back with renewed determination. China and Korea had joined the original four Members. And although Canada was not an ITER Member, a group of industries, universities and trade unions from Ontario had submitted the first bid to host the project. Japan was officially offering the site of Rokkasho Mura, and Europe had two sites to propose: Vandellòs in Spain and Cadarache in France. 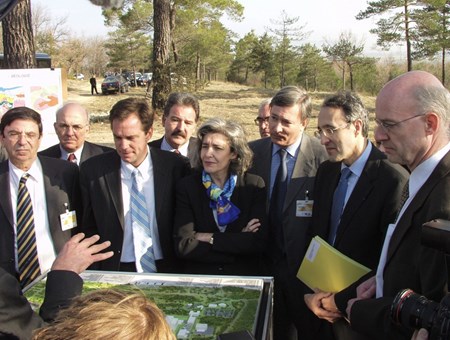 Accompanied by her chief of staff at the time, Bernard Bigot (2nd from right), Claudie Haigneré was a regular visitor to Cadarache forest, affirming her ''determination'' to see ITER become a reality on that very spot.
"As Minister of Research, space policy and ITER were on the top of my agenda," says Haigneré, who was on site last week to participate in the autumn assembly of the EIROForum (see box below). "We needed to convince the ITER Members that because of the fusion expertise accumulated in Europe, and more specifically at CEA-Cadarache, this was the place to host the installation."


Haigneré was in Cadarache on 31 March 2003, accompanied by her then chief of staff Bernard Bigot; she was back three months later on 15 July to "introduce the site" to European Commissioner Busquin, and once again on 17 November with French Prime Minister Raffarin.


"We were seeking a unanimous decision. We didn't want any country, any Member, to feel frustrated or 'dispossessed' from its own expertise. Once Europe had made its final choice in favour of Cadarache on 26 November 2003 and decided that Barcelona would host the future European Domestic Agency, I began touring the world to convince each and every Member of the merits and validity of our proposal."


Fifteen years later, back on the ITER site, Haigneré can take the full measure of what her past involvement has contributed to: the creation, against many odds, of the largest international science collaboration ever established and the construction of the most complex machine ever designed.

EIROforum is a platform that brings together eight European intergovernmental research organizations to address common issues in fundamental research in Europe. Established in 2002, the forum supports European science by pooling resources, joining expertise and combining facilities, and engages with industry to foster innovation and stimulate technology transfer. By working closely with the European Union it has been a driving force in shaping science research policy in Europe.

"I can't think of a more meaningful project for the future of mankind. ITER is something we cannot afford not to do."


For the former astronaut, presently a senior advisor to the Director General of the European Space Agency (ESA), ITER and space exploration are kin. "What I feel today at ITER is very close to what I feel when a space project comes to a successful conclusion. It's a mix of awe and wonderment and a reflexion on all the effort and patience it took to get there. Take Rosetta for instance, the European space probe that landed on comet Churyumov-Gerasimenko in August 2014. We began planning in 1994 for a probe that was launched in 2003, and that reached the comet's orbit eleven years later ..."


Large projects, whether space or energy-related, are necessarily long-term projects. "Our society as a whole and certainly the political establishment may not always feel comfortable with complex projects that span several decades and whose success is not guaranteed. What we need is a form of pedagogy, because everything that really matters for our future takes a long time to come to fruition."


¹ A medical doctor by training, Claudie Haigneré flew aboard both the Russian space station Mir (August 1996) and the International Space Station (October 2001) to carry out biological and medical experiments.